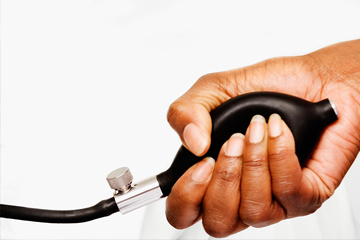 If you're consuming more than three alcoholic drinks per day, it's safe to say that your blood pressure will increase.
Medioimages/Photodisc/Thinkstock

Alcohol, as most of us know, can be a lot of fun. But it's fun that comes with a long list of side effects and warning labels. It puts you at risk for accidents, injuries, liver disease, digestive problems and a whole host of other things. And yes, in case you're wondering, it can raise your blood pressure, which then puts you at additional risk for heart attack and stroke.

But before you trash all your wine and bid a tearful goodbye to your beer, remember the "everything in moderation" motto. Light to moderate drinking -- defined as two drinks a day for men and one for women -- has long been thought to have cardiovascular benefits. Study results are all over the map, though, with some showing benefits for women and not men, and some finding greater risk for different demographic groups. But it's safe to say that moderate amounts of alcohol do help raise HDL levels (the good kind of cholesterol), and lower LDL levels (the bad stuff). It impedes the formation of blood clots, and some kinds of alcohol can help relax blood vessel walls. All of this reduces your risk of vascular disease.

When consumption increases to about three drinks in a sitting, the cardiovascular benefits suddenly decrease, and strangely, we start seeing the exact opposite outcomes. Most people's blood pressure will rise after three drinks, albeit temporarily, and many studies have shown that a regular habit of three or more drinks a day will elevate anyone's blood pressure, regardless of sex, age, race, nationality, or the type of alcohol consumed.

The cardiovascular effects of habitual heavy drinking and frequent binge drinking are well-known, and they're not pretty. This is where the effects can become long-term. Alcohol-induced hypertension is the most common form of secondary hypertension (high blood pressure caused by an underlying condition). Blood pressure fluctuates wildly during and after drinking binges, which creates a major stroke risk. And prolonged heavy drinking can result in clogged, hardened arteries. A Korean study published in 2010 found that male heavy binge drinkers with high blood pressure ran a 12 times greater risk of dying from a stroke or heart attack. Among non-heavy binge drinkers with high blood pressure, the risk was a still-scary fourfold [source: Sull].

But as dire as these statistics may sound, research has shown that alcohol-induced hypertension is reversible, even among alcohol abusers. Doctors recommend that heavy drinkers with high blood pressure slowly reduce their alcohol consumption over a week or two (going cold turkey can cause blood pressure spikes) and then continue with abstinence or very light drinking. Even cutting down to moderate consumption can lower systolic pressure (the top number) by two to four points and diastolic pressure (the bottom number) by one to two points [source: Sheps].

Can you predict the likelihood of a child becoming a victim of heart disease?
Atrial Fibrillation Overview
Cholesterol Levels