Taking care of your mouth can save your life. 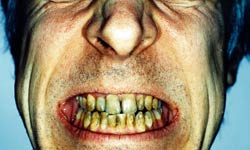 Displeasing to the eye, dangerous to the heart.
Karen Moskowitz/Getty Images

­Mitral valve prolapse makes a person more susceptible to infections. Bacteria like to collect on faulty valves, and so it goes with MVP. By brushing and flossing, you can prevent your gums from getting inflamed or irritated. If the conditions in your mouth begin to mimic those of a college dormitory, bacteria from your mouth can wind up attaching to the thin, protective layer that lines the inside of the heart's chambers and valves, the endocardium. When the surface of the valve gets infected, it causes a condition known as infective endocarditis.

This serious condition degenerates the valve, ultimately leading to heart failure. If left untreated, endocarditis is fatal. Even when treated with antibiotics, it results in death between 10 and 30 percent of the time [source: McMahon]. If your Uncle Lenny's jack-o-lantern smile doesn't convince you to brush and floss regularly, the fear of infective endocarditis should do the trick. Once the atrial valve is infected, the bacteria often accumulate and then break off and travel to other parts of the body. About half the time, endocarditis will cause swelling and abscesses in the kidneys, and 20 percent of deaths are caused by breakaway bacteria that have created swelling in the brain [source: McMahon].

Anyone with a history of prior infection or with a transplanted prosthetic valve should take antibiotics before any medical or dental surgery due to the increased amount of bloodstream bacteria such procedures produce [source: AHA].

Next: Nobody's blaming you, we just want to help.