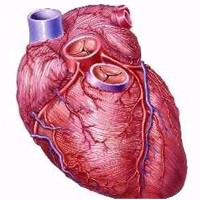 Unilateral heart failure: Because the heart is basically two pumps (right side, left side) in one, either side can fail independently of the other.

Phasic heart failure: The heart can fail in either of the two phases of the cardiac cycle -- contraction (systole) and rest (diastole).

Narrow (stenotic) valves restrict the flow of blood. To generate enough pressure to pump blood through a narrow valve, the heart has to work much harder.
Leaky (regurgitant) valves allow blood to flow back through after it has been pumped out. The heart must pump more blood with each heartbeat (the blood coming in normally plus blood leaking back), greatly increasing its workload.
Endocarditis is an infection of the heart valves that can damage them.

Shortness of breath only with exertion (dyspnea on exertion) -- As the disease progresses, the amount of exertion needed to produce dyspnea becomes less.

Shortness of breath while at rest

Shortness of breath when lying down (orthopnea) -- When lying down, blood from the elevated legs returns to the heart and causes pulmonary edema. Sitting up usually repeves this symptom. Many people sleep on several pillows to avoid this effect. As the disease progresses, some people even need to sleep sitting in a chair.

Intermittent shortness of breath at night (paroxysmal nocturnal dyspnea) -- This is caused by pulmonary edema and by depression of breathing during the sleep state.

The following are useful diagnostic tests for CHF:

Diuretics (water pills) are medications used to increase the amount of sodium (Na+) and water excreted by the kidneys. This reduces the blood volume and the amount of blood that the heart has to pump, thereby reducing its workload. The goal is to maintain ideal weight by eliminating edema. Diuretics include:

A major side effect is a low potassium (K+) level, which can cause muscle cramping and abnormal heart rhythms. Potassium supplements or potassium-sparing diuretics can be used either alone or in combination with other diuretics.

Vasodilators are groups of medications that dilate or enlarge blood vessels. During CHF, the blood vessels are often constricted due to the activation of the sympathetic nervous system and the renin-angiotensin-aldosterone system. When vasodilators are used, they decrease the resistance and blood pressure against which the heart must beat, thus increasing the cardiac output. Angiotensin converting enzyme inhibitors (ACE inhibitors) are very effective vasodilators. This is one of the few medications that have actually been shown to prolong life in CHF patients. ACE inhibitors reduce blood pressure and fluid retention by preventing the renin-angiotensin-aldosterone system from working. ACE inhibitors include:

Side effects include cough and occasionally a rash.

These medications do not cause the side effect of cough produced by ACE inhibitors.

Nitroglycerin dilates veins and can be taken under the tongue (Nitrostat), intravenously, by mouth (Isosordil, Sorbitrate, ISMO), or by skin patches (Nitro-Dur, Transderm-Nitro).

Side effects include low blood pressure, headache, edema, and constipation.

Hydralazine is a vasodilator that acts on arteries. It is used less frequently since ACE inhibitors have been found to be more effective.


Digitalis medications (digoxin, Lanoxin) increase the force of contraction of the heart muscle and also control abnormal heart rhythms, especially atrial fibrillation and atrial flutter. Therefore, digitalis is most useful when someone with atrial fibrillation or atrial flutter has CHF (a fairly common scenario). It improves heart function without increasing mortality. It has many side effects, including nausea, vomiting, many types of abnormal heart rhythms, confusion and negative interactions with other medications.


Beta blockers have been found to be useful for CHF. By blocking the beta-adrenergic receptors of the sympathetic nervous system, the heart rate and force of contraction are decreased. Of course, this must be done carefully because decreasing these two things can actually worsen CHF. Beta blockers include:
metoprolol (Lopressor, Toprol-XL) atenolol (Tenormin) carvedilol (Coreg)


Sympathomimetic medications act similarly to the sympathetic nervous system and are used when CHF is severe, such as in cardiogenic shock. They treat CHF by increasing the force of the heart's contraction. Sympathomimetic drugs include dopamine (Inotropin) and dobutamine (Dobutrex). Because they must be taken intravenously and are extremely strong, these medications are used mainly when CHF has become life threatening. They can cause abnormal heart rhythms and ischemia.


About the Author
Carl Bianco, M.D., is an emergency physician practicing at Dorchester General Hospital in Cambridge, MD, located on the Eastern Shore of Maryland. Dr. Bianco attended Medical school at Georgetown University School of Medicine and received his undergraduate degree from Georgetown University majoring in nursing and pre-med. He Completed an internship and residency in Emergency Medicine at Akron City Hospital in Akron, Ohio.