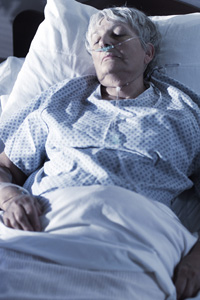 As death nears, measures can be taken to make the patient more comfortable.
Photodisc/Getty Images

As technology helps us to live longer, it will also shape how we die. With a higher-brain definition of death, you're gone when your personality is. With a whole-brain definition of death, you've lost the ability to breathe on your own again. Each breath provides the oxygen necessary for survival to the rest of the body. Very simply, dying starts to happen when your body doesn't get the oxygen it needs to survive.

Different cells die at different speeds, so the length of the dying process depends on which cells are deprived of oxygen. The brain requires a tremendous amount of oxygen but keeps very little in reserve, so any cutoff of oxygen to the brain will result in cell death within three to seven minutes; that's why a stroke can kill so quickly. When blood is cut off from the heart, a heart attack occurs and can also take a life fairly swiftly. But since our bodies aren't designed to last forever, sometimes the body's systems just simply wear out. When someone dies of extremely old age, and the family is gathered around the deathbed, you're basically observing the breakdown of these systems.

There are some outward signs that these systems are slowing down. The person will begin sleeping more to conserve the little energy that's left. When that energy is gone, the individual may lose the desire to eat and then to drink. Swallowing becomes difficult and the mouth gets very dry, so forcing the person to eat or drink could cause choking. The dying person loses bladder and bowel control, but accidents will occur less frequently as those gastrointestinal functions shut down as well and he or she consumes less.

Any ­pain that the dying person feels at this point can usually be managed by a doctor in some way, but it can be unbelievably difficult to watch these final steps of a person's life. The stage right before a person dies is called the agonal phase. The dying person is often disoriented, and it will seem like he or she can't get comfortable. It will also seem, disconcertingly, that the person can't catch a breath. There may be agonizing pauses between loud, labored breaths. If there is fluid built up in the lungs, then that congestion will cause a sound known as the death rattle. As the cells inside a person lose their connections, the person may start convulsing or having muscle spasms.

We can't know exactly how the person is feeling at this point, though those who have had near-death experiences (NDE) seem to agree that the process isn't painful. NDEs appear to have some common characteristics, including a feeling of peace and well-being, a sense of separation from the physical body and a sensation of walking through darkness to enter light. You can read more about NDEs in How Near-death Experiences Work.

Some doctors think that a near-death experience might be due to endorphins that the body releases at the actual moment of death [source: Nuland]. When the heartbeat and breath stop, the person is clinically dead. There's no circulation, and no new reserves of oxygen are reaching cells. However, clinical death also denotes that this is a point where the process is reversible, by means of CPR, a transfusion or a ventilator.

The point of no return is biological death, which begins about four to six minutes after clinical death. After the heartbeat stops, it only takes that long for brain cells to begin dying from lack of oxygen. Resuscitation is impossible at this point.

What you think has happened to the essence of the person at this point is dependent on your religious and cultural beliefs. But as our examination of the postmortem body on the next page will reveal, there's not a lot of time for sitting around and staring at the corpse.