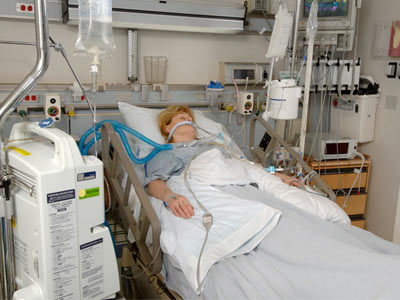 The idea of brain death developed in response to machines that can maintain bodily functions, like respiration.
David Joel/Photographer's Choice RF/Getty Images

Here was the situation in the 1960s: Doctors had the power to transplant organs and give dying people a new shot at life. At the same time, they had people with viable organs hooked up to machines, and it seemed these people were never coming back. In 1968, Harvard Medical School newly defined death as irreversible damage to the brain, or brain death.

In some ways, Harvard's definition of death is pretty close to Encyclopedia Britannica's original version, if you consider the soul a facet of what makes a person unique and human. The committee at Harvard, in essence, declared that the person was gone when his or her memories and personality, located in the brain, were irretrievably gone. The cortical brain, or the higher brain, is the part where those memories and personality are stored, and some have argued that damage to that higher brain meets the qualifications of brain death. However, most developed countries have signed on to a legal definition of brain death that considers the whole brain, including the brain stem. The brain stem regulates function such as respiration, movement and speech. A determination of brain death requires stringent testing, which you can read about in How Brain Death Works.

­Using the brain as the definition for death has presented many difficulties. It can be hard for friends and family to hear that a loved one is dead when they can see a chest rising and falling and can touch a warm body, even if those states are being maintained by machine. Some people have always found it a little disconcerting that our definition of death was in some ways shaped by a need for organs, and the argument over how much of the brain has to be dead to count is still troubling bioethicists and doctors. And good old technology is always complicating death, because new machines have been able to find extremely small traces of brain activity. When it's your child hooked up to a machine, extremely small traces may be all you need to hold out hope. And with neurological advances being made every day, is it worth keeping someone alive for longer until science finds a cure?

We'll discuss these ethical issues in a later section, but for now, let's get back to the process of dying. Though the legal definition of death is tied to brain activity, you'll rarely see "brain death" as the official cause of death. We're more familiar with causes of death like heart attack, cancer and stroke. Broadly speaking, the events that cause our death can be divided into three categories: accidental deaths, which result from bodily injuries sustained in events like car accidents, falls and drowning; violent deaths due to homicide or suicide; and natural deaths, which include diseases and passings that occur due to old age.

The fact that we can now die just from old age is quite a change from how our ancestors died. With modern medicine, we've defeated many of the infectious diseases and addressed the sanitation issues that may have killed us before. Of course, some areas of the world without access to that kind of health care still die in this way. According to the World Health Organization, the top five causes of death in 2004 in low-income countries included diarrheal diseases and HIV/AIDS, while people in high-income countries were more likely to face these top five killers: coronary heart disease, stroke, lung cancer, lower respiratory infections and pulmonary disease [source: WHO].

These days, people in high-income countries live longer. But with the blessing of a long life span comes the likelihood of death occurring due to a degenerative disease. So while accidental and violent deaths will always take lives, the great majority of us won't die instantly. Death will be more of a drawn-out process, and on the next page, we'll consider how the dying process may happen.