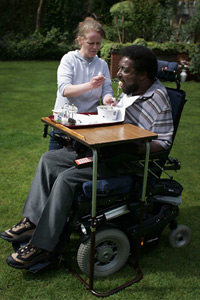 After an attack by neo-Nazis left him paralyzed, Noel Martin announced that he would seek medically assisted suicide.
Christopher Furlong/Getty Images News/Getty Images

We've described the difficulties of defining death. Thanks to medical technology, we can keep our bodies alive even when the brain is dead. To some, it's obvious at what point they want the plug pulled, and they might have legal documents outlining their choices. Documents such as a health care power of attorney and a living will provide guidelines for medical decision-making. The need for such documents has been highlighted by several cases that received national attention, such as those of Karen Ann Quinlan and Terri Schiavo. In both of these cases, family members and doctors disagreed on the point at which life-preserving machines should be disconnected, necessitating a court's involvement.

While those cases involved women who were no longer conscious, the end-of-life decisions made by some who remain conscious are no less troubling. The issue of physician-assisted suicide is obviously a sticky one. We trust our doctors to do what's best for our health, but what if the patient has decided that the best thing would be to avoid prolonged suffering and useless means of treatment? In opinion polls, most Americans demonstrate support for the concept of a doctor helping a patient end a life with painless means, but support immediately drops if the word "suicide" is used instead [source: Grossman].

­The problem generally revolves around how much authority and control -- autonomy -- a person has relating to his or her own death. In contrast to that concept is the idea of beneficence, or the more rational wisdom and care of others. How can one person make a judgment on how much another person suffers? Whose definition of suffering will be used? And what of religions and cultures that take pride in some form of suffering? Can you really make rational decisions in the midst of all these health issues? Questions such as these ensure that physician-assisted suicide will always be an ethical issue, regardless of any law that's passed concerning its use.

For those who choose not to pursue some form of suicide when facing disease, there are other end-of-life decisions. At what point should medicine shift from a regimen trying to cure a person to a treatment that can provide comfort and control pain, a state known as palliative care? Will the person choose to die at home, in a hospital or in a hospice? How can the final days be as meaningful as possible? While we know that grief is a multi-staged process that loved ones endure after a person's death, the dying person also goes through certain stages at the end of life as well. Psychiatrist Elizabeth Kubler-Ross described dying as a progression through denial, anger, bargaining, depression and acceptance. For assistance in dealing with this progression, dying patients may turn to clergy members or other leaders within their faith, or a mental health counselor.

As time goes on, technology may only make the definition of death more ethically challenging. Human beings by and large like to have control over their destinies, and death robs us of that. In some ways, the ethics of death is the fight for who will have control over the dying process -- the person, a doctor, a supreme being. The dying person can plan for a lot -- from the clothes he or she wants to be buried in to the inscription on the tombstone -- but most of us don't get to pick our cause of death. But as we mentioned in the introduction, not knowing when or how death will strike is part of the package, and it's often the part that gets us to write that novel that's been brewing in the back of our brains or to reconcile with a long-estranged family member. It's the process that provokes us to tell loved ones how much they mean to us, for one day they won't be around to hear it.

For more on death and dying, see the links below.