The Body After Death 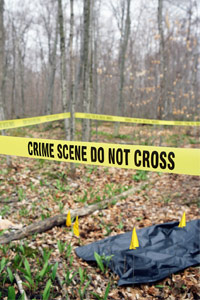 After the heart stops beating, the body immediately starts turning cold. This phase is known as algor mortis, or the death chill. Each hour, the body temperature falls about 1.5 degrees Fahrenheit (0.83 degrees Celsius) until it reaches room temperature. At the same time, without circulation to keep it moving through the body, blood starts to pool and settle. Rigor mortis, or a stiffening of the body, sets in about two to six hours after death [source: Marchant, Middleton].

While the body as a whole may be dead, little things within the body are still alive. Skin cells, for example, can be viably harvested for up to 24 hours after death [source: Mims]. But some things that are still alive lead to the putrefaction, or decomposition, of the body -- we're talking about little organisms that live in the intestines.

A few days after death, these bacteria and enzymes start the process of breaking down their host. The pancreas is full of so many bacteria that it essentially digests itself [source: Macnair]. As these organisms work their way to other organs, the body becomes discolored, first turning green, then purple, then black. If you can't see the change, you'll smell it soon enough, because the bacteria create an awful-smelling gas. In addition to smelling up the room, that gas will cause the body to bloat, the eyes to bulge out of their sockets and the tongue to swell and protrude. (In rare instances, this gas has created enough pressure after a few weeks to cause decomposing pregnant women to expel the fetus in a process known as coffin birth.)

A week after death, the skin has blistered and the slightest touch could cause it to fall off. A month after death, the hair, nails and teeth will fall out. The hair and nails, by the way, while long rumored to keep growing after death, don't have any magical growth properties. They merely look bigger as the skin dries out. Internal organs and tissues have liquefied, which will swell the body until it bursts open. At that point, a skeleton remains.

Now, most of us don't see that process because the law requires that we do something with the body. There are endless possibilities: We can choose a coffin for our body or an urn for our ashes. We can be embalmed, mummified or frozen. Some cultures were rumored to engage in cannibalistic rituals of consuming the dead, while others left their dead exposed to the elements for animals to cart away. You could donate your body to science or ask for burial at sea. But unless mummified or preserved, bodies eventually disintegrate in the process described above. However, burial in a coffin slows the process tremendously; even the type of soil in which you're buried can make a difference.

Disposal of a dead bod­y is largely regulated by cultural and religious beliefs. Early cultures buried the dead with their favorite possessions (and sometimes their favorite people) for the afterlife. Sometimes, warriors or servants were buried standing up, eternally ready for action. Orthodox Jews shroud their dead and bury them on the same day as death, while Buddhists believe that consciousness stays in the body for three days [source: Mims]. Hindus are cremated, because it's believed that burning releases the soul from the body, while Roman Catholics frown on cremation out of respect for the body as a symbol of human life [sources: Mims; Cassell et al].

Religion and culture will always be intertwined with death, and one large area of influence relates to the ethical questions surrounding the dying process. On the next page, we'll consider some of the issues.