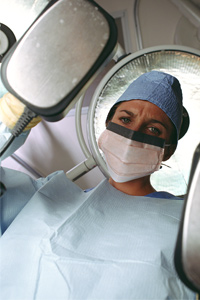 With CPR, respirators and defibrillators, we now have ways of bringing the dead back to life.
Jim Arbogast/Digital Vision/Getty Images

­Over time, death has been defined in many ways. Often, we personify death, with visions ranging from the grisly and gnarled Grim Reaper to the dashingly handsome Brad Pitt in the 1998 film "Meet Joe Black." In the first edition of Encyclopedia Britannica, death was briefly summarized as "the separation of the soul and the body," and this definition generally reflects how our views of death are tied up with our religious beliefs (or lack thereof). Fifteen editions later, the entry was 30 times longer [source: Kastenbaum]. That increase in length is likely due to the greater understanding we have of the human body. But from a purely biological standpoint, death is no easier to define; indeed, medical advances and technology have only made it tougher to determine when a person is, in fact, dead.

Not that identifying death without medical technology was any picnic, either. Imagine for a moment that you lived several hundred years ago. You're at home with the matriarch of the family, who appears to have died. You don't call a doctor for help; rather, you would have called the local priest to make the determination of death. The family and the priest would only have outward signs that the person was dead -- they may have held a mirror to the woman's mouth or a feather above her nose to look for signs of breath. If the mirror didn't cloud or the feather didn't move, then that person was as good as gone. In the 18th century, enough was known about the human body that you would have checked for a heartbeat, but it was still several decades before the invention of the stethoscope. You might have done something known as Balfour's test, which means you would have stuck needles through the skin into the heart. Then you would have watched the top of the needles, which had flags attached, to see if there was movement.

As time went on, though, people realized that even if all the outward signs of life, like respiration and heartbeat, were gone, there was still a chance that the person wasn't quite dead. In fact, tales began to circulate (with the help of one Edgar Allen Poe) that a person could be buried alive. Death was somehow, in some cases, reversible.

Today, we know there's technology that makes death quite reversible. If a person stops breathing, he or she can be hooked up to a ventilator that keeps the respiratory and circulatory systems functional. We have feeding tubes, ­CPR and a whole host of devices that can keep a person alive, if you measure life by a pulse.

But doctors and family members started to think that maybe a pulse wasn't quite enough to qualify someone as alive. There were some patients that never recovered consciousness after being hooked up to these machines. Doctors started using terms like "persistent vegetative state" and "irreversible coma." In 1958, French neurologists described this state as "coma depasse," or a state beyond coma. These people weren't coming back, because their brains were too damaged. Around the same time, doctors had discovered how to transplant organs into those near death to prolong their lives. But there was one problem -- they didn't have enough organs to go around.

Find out how these two situations collided to make a new definition of death on the next page.