Can an ulcer kill you? 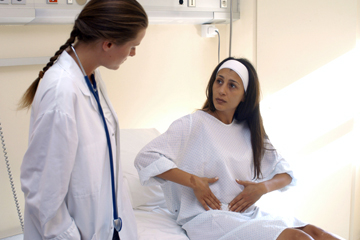 Whether internal or external, ulcers can be life threatening.
BSIP/Getty Images

Elaine knows there will be consequences for what she's about to do, but she can't help herself. She's waited weeks — months, really — for the satisfaction. She pauses before drawing a rich forkful of deep-dish Chicago-style pizza to her mouth, knowing all too well what she's about to savor: a vivid mixture of sauce and cheese, punctuated by bits of spicy Italian sausage, green peppers and onions. It's a heavenly moment that, unfortunately, will be followed by hours of hellish stomach pains.

Elaine has a peptic ulcer, which is characterized by a gnawing and painful lesion in the stomach or upper part of the small intestine. Peptic ulcers are caused by a breakdown of digestive tract tissue and pose a painful problem — especially for people who enjoy eating many things that exacerbate ulcers, such as spicy foods, tomato sauce and full-fat cheeses.

Peptic ulcers aren't the only kind of ulcers plaguing people. The word "ulcer" refers to any type of sore that forms when the skin or mucous membrane has been stripped away from tissue. An ulcer can crop up in the stomach, mouth or intestines, or it can form wherever skin breaks down. This is the case with pressure ulcers (also known as bedsores), which form when circulation to an area is inhibited and tissue dies.

Both interior and exterior ulcers can prove deadly. A number of conditions can arise from pressure ulcers, including sepsis and cellulitis. Sepsis occurs after a pressure ulcer allows infection to enter the bloodstream, causing widespread organ failure. Cellulitis refers to an infection localized in the skin and connective tissue around the sore; it's a painful and potentially fatal condition. In addition, a pressure ulcer that becomes infected can lead to infections of the bones and joints. It also can encourage a strain of squamous cell carcinoma, or cancer, that presents itself with aggressive wounds that defy treatment [source: Mayo Clinic].

Peptic ulcers can be killers, too. About 1 in 10,000 people with peptic ulcers will die because of them; in fact, about 5 percent of peptic ulcer deaths are caused by uncontrollable bleeding at wound sites [source: Stratemeier].

Ulcers – even small ones – can cause serious health concerns. And those concerns are probably worth forgoing your favorite deep-dish with sausage every now and then. For your long-term health, talking to your doctor matters even more than skipping that slice of pizza.

Is the BRAT Diet Still Beneficial?
What foods are the worst for acid reflux?
Celiac Disease Overview