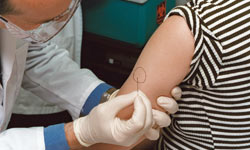 Dr. John Treanor uses a two-pronged needle to deliver the smallpox vaccine into the arm of a volunteer.
NIH

There are few loftier goals than eradicating a disease. If successful, it means easing and preventing the suffering of millions of people. Unfortunately, this is easier said than done. The likelihood of actually eradicating a disease, which means completely removing an infectious illness from the face of the Earth so that it becomes extinct, is so slim that its only been accomplished once, and that was with smallpox. But, it's not for lack of trying.

These few successes serve as inspiration for the scientists, health professionals, aid organizations and donors to keep trying to eliminate some of the nastiest and deadliest disease once and for all.

Read on to discover more about these efforts and learn about the top 10 eradicable diseases.

Smallpox is the poster child for disease eradication. That's because it's the only true success story thus far. For thousands of years, the disease swept around the globe causing countless outbreaks, killing as many as 30 percent of its victims and leaving most of its survivors scarred and blind. It killed the poor and the wealthy alike. In fact, Queen Mary II of England, Tsar Peter II of Russia and King Louis XV of France all died from smallpox. Yet all this changed in 1796 when Edward Jenner, an English scientist, created the world's first vaccine -- the smallpox vaccine -- using the cowpox virus, a similar, but less lethal disease. After a worldwide eradication effort lasting more than 100 years, the disease finally infected its last victim in 1977. 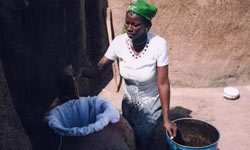 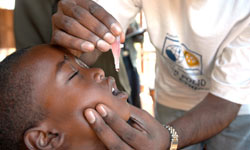 The district immunization officer administers the polio vaccine to a group of children in Gorakhpur, India during a National Immunization Day (NID) in 2000.
NIH

Poliomyelitis, or polio, is a children's disease. It can affect people of any age, but usually harms kids under 3. The virus spreads by direct person-to-person contact, or through contact with infected mucus or feces. It can rapidly attack the nervous system causing paralysis in just a few hours. Between the middle 1800s and 1900s, polio was a worldwide epidemic. Yet since the development of polio vaccines, the incidence of the disease has plummeted by 99 percent. Today, with the help of the World Health Organization, the Centers for Disease Control and Prevention, Rotary International, UNICEF and the Bill and Melinda Gates Foundation, polio teeters on the verge of eradication. 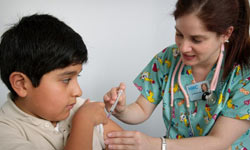 A nurse administers a vaccination, like MMR, in the shoulder muscle of a young boy.
NIH

Despite the existence of a tried and true vaccine, measles is one of the main causes of young childhood mortality [source: World Health Organization]. Measles continues to affect more than 20 million people each year, usually in Africa and Asia. It's getting better though. In 2008, about 83 percent of children were given their first dose of the measles vaccine by the age of 1. This was a huge improvement, and up from 72 percent in the year 2000 [source: World Health Organization]. Remember having the MMR (measles, mumps and rubella) immunization before going to school? That triple whammy of a vaccine has now spared millions of lives and serves as hope for millions more.

Also called "German measles," rubella is a stealthy disease that can sometimes come and go completely unnoticed. More commonly though, an itchy rash appears on a person's face and then slowly spreads down the body. Anyone of any age can be infected with the rubella virus, but it's less common in infants and people over the age of 40. Luckily it's a fairly benign illness, and if you do catch rubella, the best thing to do is stay at home for about a week while it's still contagious to stop it from spreading.

Like measles, mumps is a viral disease that before the development of the vaccine was a threat to people all over the world. Today, it mostly affects those in developing countries, where access to vaccines is few and far between. The most common symptom is swelling of the salivary glands in the mouth and throat. After the illness runs its course, people develop immunity to the virus and won't be infected again (like with chicken pox). 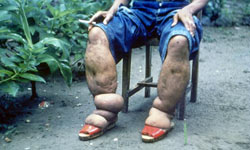 This person suffers from elephantiasis of the leg caused by filariasis.
NIH

Mosquitoes are bothersome and deadly insects. Many atrocious diseases are spread through their bite, including lymphatic filariasis. Never heard of it? This disease passes from mosquito to human and travels into the lymph nodes (those ping-pong-ball-like organs in your neck and groin that govern the immune system). If undetected, the illness slowly depletes the immune system and can cause elephantiasis, which is distinguished by a thickening of the skin and swelling of body parts. More than 120 million people worldwide are infected with the disease, though it's not found in the United States.

Like mosquitoes, worms can be terribly harmful critters because of the diseases they spread. Take the pork tapeworm (Taenia solium) for example, which uses humans and pigs to spread its larvae and cause cysticercosis. The cycle begins with a pig, usually in a rural developing country where it's allowed to wander freely. The pig eats something contaminated with the worm's eggs, which then grow in the pig's muscles. The disease is passed to humans when they eat undercooked pork infected with the larvae. The outcome is painful. The larvae can cause lesions in the brain, muscles to swell, epileptic fits and vision problems. Luckily, anti-parasitic drugs combined with anti-inflammatory drugs can help cure the disease.

Another tiny worm, another devastating disease. The worm this time is Onchocerca volvulus, which can be found inside infected blackflies. The disease is passed to a person after being bitten by a blackfly. Known as onchocerciasis, or river blindness, the symptoms range from skin rash, eye lesions that cause blindness and bumps under the skin. Onchocerciasis used to be a main cause of preventable blindness and skin disease, but thanks to efforts by the World Health Organization (WHO), this has changed. 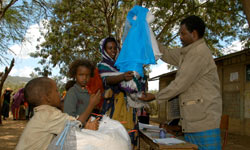 Women in the Babile district in eastern Ethiopia receive mosquito nets to help prevent malaria during the largest bed net distribution campaign in the history of Africa.
NIH

The final disease in our Top 10 list is malaria. This disease is so elusive that even after a worldwide eradication effort it continues to kill approximately 1 million people each year. Sadly, it's very unlikely this disease will ever be eradicated. Why? Because it's caused by an unwieldy parasite that mutates faster than you can say m-a-l-a-r-i-a. What's the good news? It's preventable and curable. The best way to prevent malaria is to stop mosquito bites by using mosquito repellents or insecticide treated bed nets. There are also preventative medicines that can be taken orally. Treatment involves ingesting heavy antibiotics.

Eradicating malaria is as lofty a vision as it gets, and many have tried. In fact, four Nobel Prizes have been awarded for work associated with malaria. They went to Sir Ronald Ross (1902), Charles Louis Alphonse Laveran (1907), Julius Wagner-Jauregg (1927) and Paul Hermann Muller (1948). 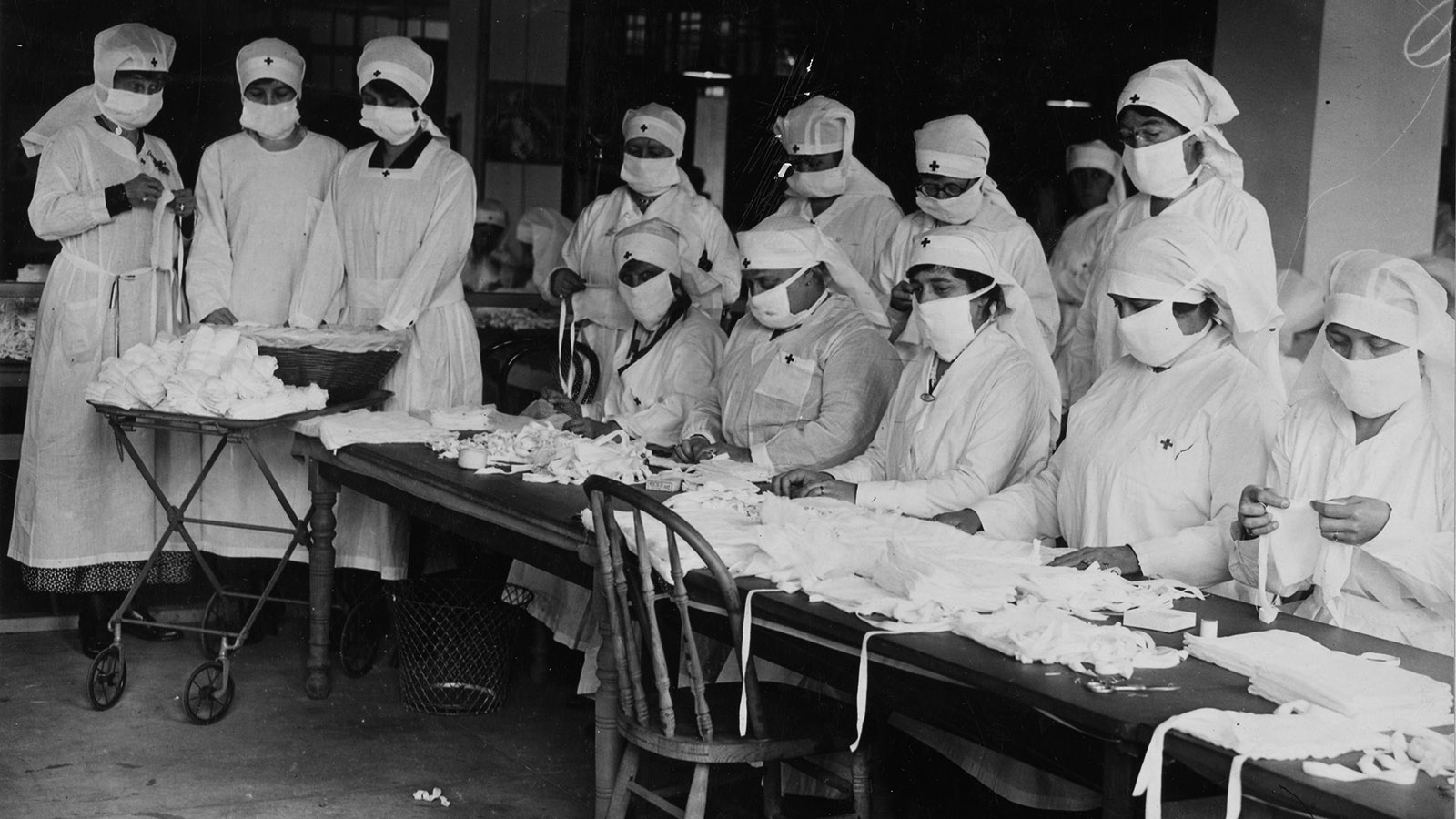 Despite strict closing and hygiene orders, San Francisco was hit hard by the 1918-1919 influenza pandemic. Some balked at the rules and that meant more people died.