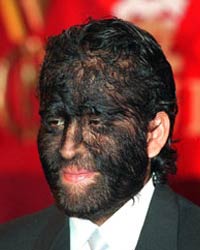 Some diseases are easier to diagnose than others. Take hypertrichosis, for example, which might be diagnosed the second the person enters a doctor's waiting room. How? The hair growing out of his or her cheeks, forehead or hands.

Hypertrichosis is the overproduction of hair anywhere on the body. Men and women, babies and adults -- the condition doesn't discriminate. There are variations of the disorder, some resulting in hair growth patterns that likely contributed to ancient "wolfman" folklore. (In fact, in the past, people with hypertrichosis were often featured in carnival sideshows.) Some people are affected head to toe, while others may only experience unusual hair growth on isolated parts of their bodies.

When present at birth, it's the result of the fine, soft hair that covers a fetus continuing to grow, instead of shedding before birth as it normally does. But more often, it develops as a result of some factor other than genetics, such as the body reacting to certain medications or anabolic steroids. Some diseases and conditions, such as advanced-stage HIV or a hormone imbalance, can also result in the unusual hair-growth patterns of hypertrichosis. Underlying causes can usually be treated, and as for the hair, there are the same options we all use to get rid of unwanted hair: shaving, waxing and electrolysis.