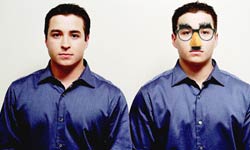 Frégoli syndrome leads a person to believe that people he or she knows have adopted a different appearance and assumed the bodies of total strangers. But other than the complete change in appearance (and possibly gender or ethnicity), the personality and identity of the acquaintance is perceived exactly the same as always. In some cases, patients believe the person's shape has shifted (or is still shifting), while in other cases, the patient may believe the loved one's identity or personality has been replicated and inserted into another physical shell.

If you had Frégoli syndrome, you might go to the post office and be surprised to learn that your mother had taken the form of the postal worker behind the counter. Even worse, as you exit the building, you would realize your mother has changed form again, and is now the man exiting the car parked next to your own. As you summon the police to report this, you would be dismayed to realize the two officers who show up to take your report are in fact your mother and your childhood neighbor.

When Frégoli syndrome does occur, it's often experienced by people with a history of stroke, head injuries, seizures or Alzheimer's disease. Treatment, which normally results in some improvement, often includes antidepressants and antipsychotics.