Does aspartame cause MS? 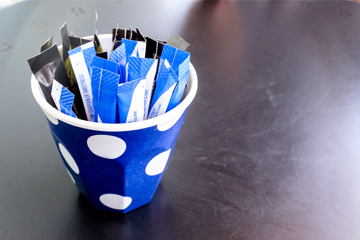 The idea that aspartame causes MS most likely stems from a chain email.
silkenphotography/ThinkStock

For 10 years, Nancy drank diet soda -- sometimes as many as four or five a day. Otherwise, she ate and drank in moderation, exercised regularly and got plenty of sleep. Then one day, as Nancy picked up her glass of diet soda, it slipped from her fingers and crashed to the floor. Shocked, Nancy tried again, only to discover her hand wouldn't properly respond. The problems subsisted for weeks, then her legs began to buckle and her vision to blur. Eventually, Nancy's doctor diagnosed her with multiple sclerosis (MS), a disease that affects the brain, spinal cord and optic nerves.

Desperate to know more about MS, Nancy scoured the Internet for answers. She learned MS usually strikes between ages 20 and 40, that it affects women more often than men and that scientists don't yet understand its root cause [source: WebMD]. Then she came across an obscure message board and realized she might have a clue after all. There might be a link between aspartame and MS. Wasn't that the ingredient in all the diet sodas she'd had over the years?

While the Multiple Sclerosis Foundation stops short of saying aspartame -- or any additive, for that matter -- is 100 percent safe, it doesn't subscribe to the notion that aspartame causes MS. Aspartame was approved by the U.S. Food and Drug Administration (FDA) for use in carbonated beverages, and other beverages and foods in the 1980s. After a volley of complaints from consumers experiencing everything from insomnia to diarrhea after ingesting carbonated beverages containing aspartame, the Centers for Disease Control and Prevention (CDC) investigated aspartame's use and concluded there wasn't any evidence that it caused these symptoms. More to the point, the CDC failed to find a link between aspartame and the onset of MS [source: Guthrie].

The idea that aspartame causes MS most likely stems from a supposed first-hand account of an aspartame expert that has persisted on the Internet and in chain e-mails since the 1990s. Although this article is frequently attributed to the author "Nancy Merkle," nobody has ever come forward to take credit and the article contains no citations [source: Guthrie].

The FDA Center for Drug Evaluation and Research refuted the claims made in the account, which linked aspartame to a number of diseases and maladies, including MS. According to the FDA, aspartame is one of the most frequently tested food additives and there's no evidence to support a link between aspartame and MS [source: Hattan]. That's good news for Nancy and others who drink diet beverages and opt for "low-cal" foods containing aspartame.