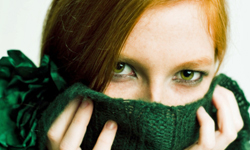 What are you hiding?
iStockphoto/Thinkstock

If you think your ankles are actually cankles or your ears are a little Dumboesque for that short haircut, don't feel too bad. You're in the majority. Almost everyone has at least one real or perceived physical imperfection. Like your grandmother probably told you, "Nobody's perfect." The exact nature of your preoccupation with looking good may have you seeking the help of a plastic surgeon or just cramming a hat on your head to conceal a thinning topknot. There's a difference between being sensitive about a few stretch marks and refusing to change out of your yoga pants for fear of ridicule, though.

In extreme cases, body image issues may fall into the category of body dysmorphic disorder (BDD), a condition characterized by obsessive worry about appearance, even in individuals who may actually look quite attractive. The difference between disliking, say, your complexion, and being so preoccupied with it that it interferes with your daily life is what distinguishes BDD sufferers from the 93 percent of women and 82 percent of men who openly admit that they care about their appearance and work to look more attractive [source: Phillips].

Although the American Society of Plastic Surgeons reports that there were more than 13.1 million cosmetic procedures performed in the U.S. in 2010, many people prefer concealment to making permanent modifications to their appearance. A long-sleeved blouse, boxy T-shirt or ball cap can often provide a quick cover-up, and with no one the wiser, concealment is a cheaper and less painful alternative to surgery, too, at least for those areas that can be concealed [source: American Society of Plastic Surgeons].

On the next pages, let's look at 10 body parts people hide to discover what it is that makes these areas ripe for self-criticism.