by the Editors of Publications International, Ltd.
Prev NEXT
1 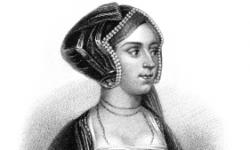 Anne Boleyn, second wife to Henry VIII of England, is commonly believed to have had 11 fingers and possibly a third breast. Historians believe that she did have an extra finger or at least some sort of growth on her hand that resembled an extra finger, but it's unlikely that she had an extra breast. This rumor may have been started by her enemies because in Tudor times an extra breast was believed to be the sign of a witch.