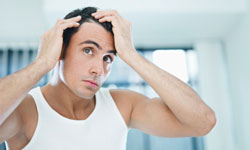 Before you start tracking your hairline or stressing that your body is too awkward or inadequate, consider whether worrying is really worth the effort.
iStockphoto/Thinkstock

Embarrassment doesn't make any sense -- it doesn't have to. It wraps itself around your mind like a snake and won't let go.

Tell a guy when he's 13 years old that his wrists are too skinny and he's liable to start wearing long-sleeved shirts. Really long-sleeved shirts. For years, maybe. Consistently mock a guy for having ridiculously thick hair -- can you really have hair that's too thick? -- and he'll wonder if maybe he should break out the razor and go Vin Diesel.

Such highly individualized quirks aside, there are some physical characteristics that large groups of men are embarrassed about -- which makes it even more ridiculous, when you think about it. How can you be embarrassed about a common trait? But, like we said, embarrassment doesn't make any sense. Maybe the best thing to do is laugh it off. Let's give it a try.