Why is baby poop so smelly? 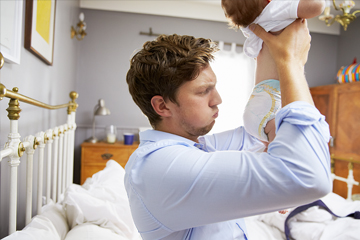 Anyone with a newborn has experienced the unique scent of a soiled diaper, but why is it so smelly?
monkeybusinessimages/ThinkStock

Babies are sweet, but cleaning up after them isn't always a pleasure. If you've ever contemplated using a clothespin on your nose when changing a diaper, you're not alone. Why is baby poop so smelly?

It isn't always — at least not during the first few months of a baby's life. Whether baby poop is smelly has everything to do with what a baby is being fed. In general, babies up to 6 months old who are exclusively breastfed have poop that is a different color and consistency — and less odiferous — than babies who are formula-fed. This is because formula is more difficult and time-consuming for babies to digest [source: Tommee Tippee]. However, once infants begin eating other foods, the smell of their poop will become stronger and more varied [source: Swanson].

The smell of your baby's poop is influenced by another important factor, too: dear ol' mom. When babies are born, they are exposed to hundreds of varieties of naturally occurring bacteria in the birth canal. In addition, beneficial bacteria from a mother's digestive system are present in breast milk and passed to her baby during breastfeeding. The bacteria are then passed to the baby, where it takes up residence in the digestive system [source: Science Daily].

These bacteria will remain with the baby for a lifetime. What's more, this particular cocktail of bacteria directly impacts the baby's digestion; the more inefficient the bacteria, the smellier a person's bowel movements will be throughout their lifetime [source: Smith].

It appears that C-sections and formula feedings may disrupt a baby's receipt of "good" digestive bacteria. Because babies delivered by C-section don't travel through the vaginal tract, they don't receive exposure to the mother's bacteria. One study found that babies delivered by C-section had fewer types of bacteria and a lower presence of specific strains of helpful bacteria. In some cases, there was an absence of certain bacteria strains altogether. Babies fed formula, rather than breast milk, also had fewer strains of bacteria present, and showed higher amounts of Clostridium difficile, a bacteria associated with the onset of allergies [sources: Gardner, Kozyrskyij].

One notable exception to the C-section findings? Babies born via emergency C-section. These babies had an even higher variety of bacteria than those born vaginally, for reasons that aren't yet well understood. It's been posited that because the vaginal birth began before the C-section, the babies were still exposed to beneficial bacteria. And it's this beneficial bacteria, designed to make digestion more efficient, that will influence how bad your baby's poop will smell [sources: Branswell, Kozyrskyij].

Do You Turn the Door Key and Have to Pee? It May Be All in Your Brain
Aphantasia: When Your Mind's Eye Is Blank
Can holding in a sneeze kill you?