Why do we vomit when we see something gross? 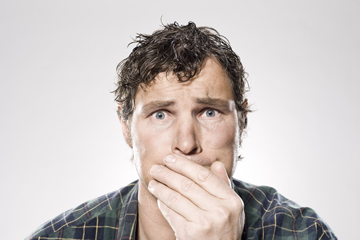 Why do we vomit when we see something gross? It could be the way our brains are wired.
RubberBall Productions/Getty Images

Warning! If you're a sympathetic vomiter, you might want to skip this article.

As children, my older brothers and I always sat at the same places around the dinner table. Unfortunately, they were seated right across from me, the puker. I have vivid memories of barfing onto my plate as my mom and dad briskly cleared dishes and grabbed paper towels, all without a break in conversation. It happened so often that one of my siblings learned to hold up his dinner plate and keep eating as the mess was cleaned.

As I aged, the incidences became less frequent, but remained a real possibility, triggered by gory movies, half-chewed food and anyone who dared to become sick around me. And I know I'm not alone. Why do we vomit when we see something gross?

It could be the way our brains are wired. Scientists have discovered "mirror neurons" in the brain. Thanks to these neurons, we're able to empathize with others and their activities. In one study, functional MRI scans of participants showed that brain activity was similar whether subjects were imitating an emotion or observing an emotion. The brain's imitation and observation areas are so linked, we may feel like crying if we see someone else cry. Or, more to the point, vomit if we see someone else vomit [source: Carr].

The urge to vomit when we see something gross also could be a form of self-preservation. Let's say a prehistoric human ate a handful of poisonous red berries, believing them to be a delicious snack, and then became violently ill. In the future, simply seeing those berries will cause feelings of nausea and prompt a refusal to eat them. This conditioned reaction, in which your body creates a strong physical aversion, could save your life. Or go wrong.

Perhaps you ate eggs for breakfast and then went happily to work. For lunch, you opted for sushi and, by your mid-afternoon break, became violently ill. It's not the eggs' fault. You contracted food poisoning from day-old sushi. Even so, you spend the next few months avoiding sushi and eggs. The sushi makes sense, but what about the eggs? The sight of them makes you want to vomit, even though they weren't the real culprits. However, your brain believes the eggs made you ill and is mistakenly trying to protect you from them [source: Solot].

Tapping into this elemental aversion could affect other areas of life, too. Seeing gross things, even though they make us feel like vomiting, could spur us to take action. A study from 2006 to 2011 by the W.P. Carey School of Business at Arizona State University found that advertisements displaying gross images compelled people to act. For example, a sharp-clawed, wart-bearing rat-like creature meant to symbolize the fungus that caused toenail infections and athlete's foot was more effective in getting people to buy medication than ads that appealed only to intellect or fear.

The urge to vomit when we see something gross may be a protective mechanism but also could be the next big marketing breakthrough [source: Horovitz].

Why do farts stink?
Without a Hippocampus, Your Long-term Memory Is History
When It Comes to Q-Tips, We Do the One Thing We're Not Supposed to. Why?