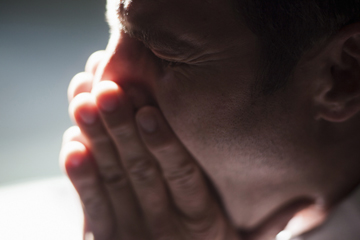 Don't stifle that sneeze! It could cause eardrum ruptures or break a blood vessel in your eye.
Chad Springer/Getty Images

It's a threat that could strike anyone, anywhere. Where will you be when it hits? You could be standing over beakers in a chemistry lab, carefully measuring droplets of acid into a vial. Or driving along a busy two-lane highway, trying to keep your composure as oncoming traffic zooms by.

And, suddenly, there it is: an ear-splitting, saliva-spewing, nose-clearing sneeze. But what if you decided, just as the urge to sneeze peaked, to stop it? Would stifling your sneeze be dangerous?

Blocking a sneeze from taking its natural course could cause bodily harm, but only in rare, worst-case instances. The explosion of air from your lungs could be redirected up and into the ears' Eustachian tubes. These delicate tubes are susceptible to injury — even a strong internal puff of air can rupture eardrums, cause vertigo (dizziness) or a hearing deficit. The force of the stopped sneeze also could push infected mucus into the Eustachian tube, where it could reach the middle ear and spread infection.

Stifling a sneeze could cause other issues, too, ranging from the potentially dangerous to the downright embarrassing. Let's say you have a violent sneeze brewing, but at the last minute, squeeze your nostrils to hold it in. The force of the sneeze could cause everything from a neck injury to temporary incontinence [source: Binns]. A weakened blood vessel in the brain could rupture if a sneeze is snuffed, thanks to a temporary spike in blood pressure. Eye injuries could range from hemorrhages deep within the orbital to the bruises brought on by an increase in pressure [source: Peterson].

There is a safer way, it turns out, to stifle a sneeze: pressing against your fingers against your upper lip, just as you feel it coming on. This can interrupt the signals to sneeze that your brain is sending along the facial nerves. Once the sneeze starts, though, your best course of action may be to let it loose. You might cover everything in a 3-foot (1-meter) radius with snot, but — hey — at least you won't rupture your eardrums, put a kink in your neck or break a blood vessel in your eye.

Doctors Provide Yet Another Reason to Never Hold in a Sneeze
Can holding in a sneeze kill you?
Can pressing your upper lip stifle a sneeze?

Is it possible to cry blood?
Is sitting too close to the TV really bad for your eyes?
What happens if you eat boogers?