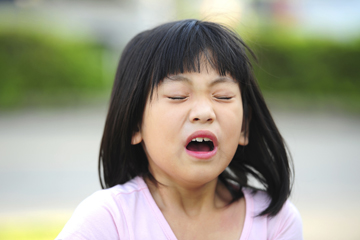 The jury's still out on whether tickling your upper palate with your tongue prevents a sneeze, but there may be something to the idea.
antpkr/ThinkStock

You recognize the familiar tickle a moment before your sneeze strikes. For a split second, you think about trying to stop the annoying eruption, but in the end, the urge becomes too powerful. Achoo! You've just succumbed to one of your body's natural defense mechanisms, designed to jettison foreign particles into the atmosphere and away from your body, where they will pose less of a threat to your airways. And jettison they do -- a typical sneeze has the velocity of 100 miles per hour (160 kilometers per hour) [source: Hadhazy]!

A successful sneeze always starts with a bit of tickling. And we don't mean the playful kind that makes you giggle. Instead, this tickle begins when the tiny hairs that line the nasal passages, called cilia, trap dust and other unwanted particles. As these foreign objects become trapped, they begin to produce a tickling sensation that stimulates the trigeminal nerve receptors inside your nasal passages. The trigeminal nerve signals the lateral medulla -- the portion of your brain responsible for pain and temperature sensations, as well as swallowing and gagging -- to produce a sneeze. In return, you sneeze and banish the offenders from your nasal cavities. Scientists call the process sternutation [sources: Encyclopedia Britannica, MedicineNet].

Is there a way to short-circuit the sensation and stifle a sneeze? There's no shortage of old wives' tales purporting to work as sneeze-stoppers, ranging from "pinch your upper lip" to "tickle the roof of your mouth with your tongue."

Although the jury's still out on whether tickling your upper palate with your tongue will prevent a sneeze, there may be something to the idea. Anecdotally speaking, it works for some people, even if the scientific community has yet to study the concept.

If a little tongue tickle doesn't do the trick to stop your sneeze, try putting one finger under your nose or doing some deep breathing. Breathing through your mouth can reduce stimulation of the cilia in the nose and may help the moment pass without a sneeze coming to fruition [source: Hadhazy].

Is it possible to swallow your tongue?
Can holding in a sneeze kill you?
If Sunlight Makes You Sneeze, You're Not Alone

Is it possible to change your eye color?
How Long Does LASIK Last?
Can pressing your upper lip stifle a sneeze?