What happens if you eat boogers? 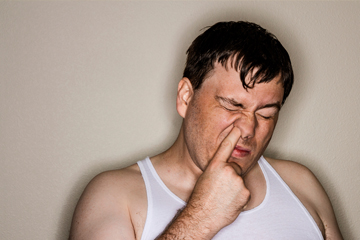 Could eating boogers build up your immune system?
txking/ThinkStock

It's the kind of afternoon you can't imagine being anywhere but outdoors. This time, you're at the park, not for exercise, but for some mental recreation. It's time to pretend you're a kid again, flying down slippery slides and stretching your toes to the sky on the swings. Just as you're about to take a trip across the monkey bars, you spot something that changes your mind. A toddler wanders into view, index finger firmly ensconced in his left nostril, digging for gold. Worse yet, he finds it. And, gulp, eats it, too.

Sure, picking and eating your boogers isn't something people do in polite company. But you've probably known someone who has dined at the ol' nostril buffet before. Is it really so bad?

Boogers are made of the mucus that lines the nostrils and, along with the tiny hairs known as cilia, protect the lungs from foreign objects such as germs, dust, dirt and pollen. Most of the time, the cilia trap these minute invaders, encapsulate them with mucus and move them out of the nose. Sometimes, however, this mucus becomes gummy and gelatinous -- or hard and crusty -- and forms what is known colloquially as a booger [source: Kids Health].

The idea of eating one's own germ-laden boogers may not sound appealing. It certainly doesn't seem sanitary. It's not a great idea to pick your nose, as you can cause it to bleed. So why is one guy out there urging us to do it?

There's an emerging hypothesis that contends eating boogers may be good for you. Scott Napper, a biochemistry professor at the University of Saskatchewan, has an intriguing idea that could change the game for booger-eaters everywhere.

Boogers, Napper posits, are tiny bundles packed with biological information that, when consumed, could prep the body to better fight the war with germs. Each booger contains pathogens specific to the environment and circumstance of the booger creator. Therefore, eating your own booger could inform the body's immune system about the dangers it faces and encourage it to build up its defenses.

He plans to test the idea by asking volunteers to plant a molecule in their noses. Half the group would then need to eat their boogers and half would not. Then, for each group, Napper would compare their immune responses against the molecule. If his hypothesis has traction, he believes he'll find that the participants who ate their boogers have an increased immune reaction to the specifically planted molecule [source: Jaslow].

Napper's theory does have some skeptics, however. Dr. William Schaffner of Vanderbilt University points out that we swallow nasal secretions all the time, especially when we sleep, so eating our boogers is unlikely to offer any more immune system strength [source: Lupkin].

Although as of yet, Napper's not been able to gather enough volunteers for the study, he does contend that snot has a sweet, sugary taste that could predispose humans to consume it. Incidentally, Napper did find the "booger-eating for your own good" discussion is a great way to engage the first-year students in his science classroom.

Why do we have boogers?
Is there a health benefit to picking your nose?
What are eye boogers made of?

Are There Really Arachnids Living In My Eyelashes?
Please Stop Flushing Your Contacts!
Do Blue Light Glasses Even Work?