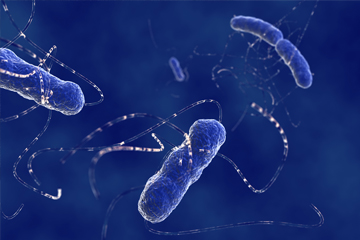 E. coli is a key constituent of your gut flora.
selvanegra/ThinkStock

While many of us are accustomed to thinking of microbes inside our bodies as threatening invaders, we have billions of microorganisms in our intestines that are vital to our health. They play a crucial role in digestion by breaking down plant fiber. In recent years, scientists have discovered that they also help control how we store fat, how we balance levels of glucose in our bloodstream and how we respond to hormones that regulate our hunger. There's even evidence that the particular mix of microbes in our bodies in large part can determine whether we're slim or overweight [source: Wallis].

Broad-spectrum antibiotics attack a wide range of microbes -- including the beneficial bacteria. A study published in 2012 tested the effects of several different antibiotics and found that after only 24 hours, they reduced the diversity of gut flora [source: Cotter]. Once you've laid waste to your beneficial microorganisms in your gut, harmful ones may move in. "When patients in the hospital or nursing home setting receive antibiotics, it is doubly dangerous when they lose their native colonic bacteria," Case Western Reserve University researcher Usha Stiefel wrote in a 2014 article. "Healthcare settings are full of resistant or particularly virulent bacteria, and so patients are especially vulnerable to acquiring these bacteria within their intestinal tracts" [source: ASM].

Eventually, the beneficial bacteria inside your body rebound, for the most part, and by the end of the course of antibiotics, your internal microbe population is similar to what it was before. But sheer quantity may be misleading, because researchers have found that those surviving bacteria have decreased ability to produce proteins, absorb iron, digest certain foods and produce essential chemical molecules [source: ScienceDaily]. And antibiotics' effect on the mix of the bacteria is more persistent.

A 2012 study published in Antimicrobial Agents and Chemotherapy found that eight weeks after treatment with antibiotics, infants still had reduced diversity of their internal flora [source: ScienceDaily]. A study of adults treated with a powerful broad-spectrum antibiotic, published in Proceedings of the National Academy of Sciences in 2011, revealed that the mix of their internal microorganisms remained disturbed after the 10-month experiment and that the full consequences of this altered state remain unknown [source: Dethlefsen and Relman].

Keep that in mind the next time you're tempted to push for a prescription for what might be a virus and not a bacterial infection.

Can an emergency room refuse to treat you?
How Telemedicine Can Help You During COVID-19 and Beyond
What is the future of minimally invasive surgery?