What happens if you miss a dose of antibiotics? 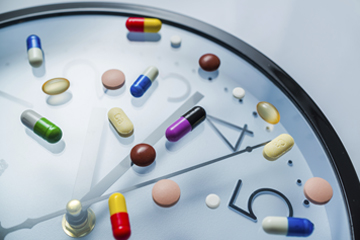 If you miss a dose of antibiotics, it's best to try to get back on track as soon as you realize it.
Yestock/ThinkStock

There's a strange paradox in the use of antibiotics. People tend to see them as the silver bullets that will get rid of illnesses, so much so that they pressure their doctors to prescribe them even when they're not really needed. But once they do get a prescription, people often neglect to take all of the medication as directed. Non-compliance is a particularly big problem when the patient is a child. In one study of children with streptococcal infections who got a 10-day course of penicillin, 56 percent had stopped taking their medication by the third day, and by the ninth day, 82 percent had stopped [source: Merck Manuals].

Adults probably don't do much better. Though recent data is lacking, in a study conducted in the 1990s by the American Lung Association, more than half of patients admitted that they didn't complete all the doses of their last course of antibiotics, and about a quarter said that they had stopped taking their medication as soon as they started feeling better [source: Brody].

Patients do this even though their doctors caution that not taking all of their medication puts them at risk of developing an antibiotic-resistant infection. Most who didn't follow the regimen said that it was simply too inconvenient [source: Brody].

But let's assume that you're not one of those non-diligent people, and you actually intend to follow directions -- but, for one reason or another, you simply forget to take your pill. What happens then?

Skipping a dose of an antibiotic allows the level of the medication in your bloodstream to drop off, which can set back your recovery. You'll also give the microbe more of a chance to develop immunity to the antibiotic [source: Brody].

The good news is that if you miss just one dose, medical experts say you probably won't be hurt too much. As soon as you realize your mistake, simply take a regular dose (don't double up), and then adjust the schedule of your doses. For example, if you were supposed to take your pill at 8 a.m. daily but end up taking it at 2 p.m., switch to taking it at that time every day. Extend the end of your treatment a little, and take the missed dose at the end [source: ATS].

How Personalized Medicine Works
What is the future of family medicine?
How do antibiotics work?