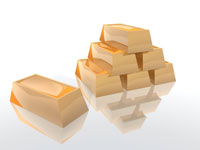 In a study published in the July 2007 issue of Analytical Chemistry, scientists from Purdue University detailed their use of gold nanoparticles to detect breast cancer. Their work, along with similar studies at other universities, has the potential to radically change breast cancer detection.

The procedure works by identifying the proteins found on the exteriors of cancer cells. Different types of cancer have different proteins on their surfaces that serve as unique markers. Nanorods, gold nanoparticles shaped like rods, use specialized antibodies to latch onto the protein markers for breast cancer, or for another cancer type. After the nanorods bind to proteins in a blood sample, scientists examine how they scatter light. Each protein-nanorod combination scatters light in a unique way, allowing for precise diagnoses.

The use of gold nanoparticles is not new to this study. These tiny particles -- it would take 500 of them to span the width of a human hair -- are particularly suited to detect toxins, pathogens and cancers and are a subject of much experimentation [Source: BBC News]. The scientists at Purdue used nanorods capable of attaching to three types of breast cancer markers, with two of the markers identifying how invasive the cancer is. The lead researcher on the study, Joseph Irudayaraji, said that these nanorods could one day form part of a much more thorough test, binding to up to 15 unique markers [Source: Physorg].

Using nanorods cuts the price of the diagnosis by two-thirds compared to the similar method of flow cytometry, in which fluorescent markers bind to cancer cells. Flow cytometry requires a bigger sample size with thousands of times more cells than is needed for nanorods, meaning that nanorods are capable of helping to determine earlier diagnoses. Nanorods prove much less invasive than some other methods because they use blood samples and don't require a biopsy. Part of the cost savings comes from scientists being able to use a conventional microscope and light source to view the samples, unlike other methods that employ expensive microscopes or lasers.

­In a different study, Dr. Irudayaraj showed that gold nanorods could be used to detect cancer stem cells. The discovery is particularly valuable because cancer stem cells cause the out-of-control growth that makes malignant tumors so deadly.

Dr. Irudayaraji said that gold nanoparticles could be widely available for cancer diagnoses sometime in 2011.

On the next page, we'll examine these efforts to use nanotechnology to fight cancer and some of the dangers involved. 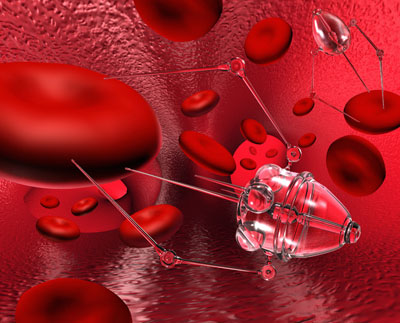 Nanotechnology is one of the most popular areas of scientific research, especially with regard to medical applications. We've already discussed some of the new detection methods that should bring about cheaper, faster and less invasive cancer diagnoses. But once the diagnosis occurs, there's still the prospect of surgery, chemotherapy or radiation treatment to destroy the cancer. Unfortunately, these treatments can carry serious side effects. Chemotherapy can cause a variety of ailments, including hair loss, digestive problems, nausea, lack of energy and mouth ulcers.

But nanotechnologists think they have an answer for treatment as well, and it comes in the form of targeted drug therapies. If scientists can load their cancer-detecting gold nanoparticles with anticancer drugs, they could attack the cancer exactly where it lives. Such a treatment means fewer side effects and less medication used. Nanoparticles also carry the potential for targeted and time-release drugs. A potent dose of drugs could be delivered to a specific area but engineered to release over a planned period to ensure maximum effectiveness and the patient's safety.

These treatments aim to take advantage of the power of nanotechnology and the voracious tendencies of cancer cells, which feast on everything in sight, including drug-laden nanoparticles. One experiment of this type used modified bacteria cells that were 20 percent the size of normal cells. These cells were equipped with antibodies that latched onto cancer cells before releasing the anticancer drugs they contained.

It may sound odd, but the dye in your blue jeans or your ballpoint pen has also been paired with gold nanoparticles to fight cancer. This dye, known as phthalocyanine, reacts with light. The nanoparticles take the dye directly to cancer cells while normal cells reject the dye. Once the particles are inside, scientists "activate" them with light to destroy the cancer. Similar therapies have existed to treat skin cancers with light-activated dye, but scientists are now working to use nanoparticles and dye to treat tumors deep in the body.

From manufacturing to medicine to many types of scientific research, nanoparticles are now rather common, but some scientists have voiced concerns about their negative health effects. Nanoparticles' small size allows them to infiltrate almost anywhere. That's great for cancer treatment but potentially harmful to healthy cells and DNA. There are also questions about how to dispose of nanoparticles used in manufacturing or other processes. Special disposal techniques are needed to prevent harmful particles from ending up in the water supply or in the general environment, where they'd be impossible to track.

Gold nanoparticles are a popular choice for medical research, diagnostic testing and cancer treatment, but there are numerous types of nanoparticles in use and in development. Bill Hammack, a professor of chemical engineering at the University of Illinois, warned that nanoparticles are "technologically sweet" [Source: Marketplace]. In other words, scientists are so wrapped up in what they can do, they're not asking if they should do it. The Food and Drug Administration has a task force on nanotechnology, but as of yet, the government has exerted little oversight or regulation.

For more information on nanoparticles, medical research and other related topics, please check out the links on the next page.

How Google Flu Trends Works
What is the future of spine surgery?
Why would you take poison as medicine?