Could I lose weight by getting my ear stapled? 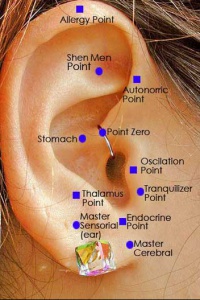 Some believe that an ear staple will suppress a person's appetite.

Some call it body piercing. Some call it acupuncture. Some call it absurd. Over the last 10 years, a purported weight-loss method that involves getting your ear stapled has slowly picked up steam to the point that states have begun to regulate the practice.

The procedure itself is pretty straightforward. A practitioner uses a specialized staple gun to pierce a slightly protruding piece of cartilage just above and to the left of the tragus portion of the external ear. If you've ever gotten your ear cartilage pierced, you know that it hurts, but it's not like, say, getting shot in the stomach. The surgical-grade, very thin staple remains in the ear from anywhere from six weeks to three months, and the basic idea is that it suppresses the appetite while it's in there. Once the body gets used to the staple, it needs to be repositioned, which means returning to the practitioner to have the ear re-stapled in a slightly different location. Practitioners charge anywhere from $35 to $60 per ear, and some recommend stapling both of your ears to achieve the maximum weight loss effect. All ear-stapling practitioners will tell you it works wonders (especially if you combine it with a good diet and exercise regimen). How it supposedly works wonders is a hazier area.

Most believers point the ancient Chinese practice of acupuncture for the source of the effect, while some attribute it to underlying physical connections in the body. According to some sources, the outer ear and the abdominal organs are right next to each other during fetal development in the womb, and the physical connection between these body parts remains via nerve pathways even after they are no longer in close proximity. In this explanation, stimulating a part of the external ear also stimulates the abdominal organs, including the stomach. Other practitioners claim that piercing this particular area of the ear releases endorphins -- chemicals released by the brain during pleasurable activities that make you feel good. And because the staple stays in the ear, the endorphin effect is maintained, reducing a person's stress and anxiety levels, which for many people are a big part of the reason they over-eat.

But most people look at ear stapling as a derivative of acupuncture. The basis of acupuncture is the concept of qi, or life force (see How does acupressure work?). In ancient Chinese practices (and many modern derivatives of the ancient form), stimulating specific points on the body using needles or finger pressure can open or clear certain channels that run throughout the body that are crucial to overall health and wellbeing. Ear stapling calls specifically upon auricular acupuncture, or acupuncture that focuses entirely on the ear as a microcosm of the entire human body, for its supposed efficacy.

Believers in ear stapling claim that by continuously stimulating the Zero Point location, which is said by some to include the Stomach point presented above, they can curb appetite, reduce stress and increase metabolism, among other benefits. Some people who have undergone the procedure say it also eliminates migraine headaches, nicotine craving and insomnia. But is there scientific evidence to support these claims? Read on to find out.

A couple of scientific studies back up the use of auricular acupuncture in weight loss. According to one study conducted at the University of Adelaide in Australia in 1998, "Acupuncture stimulates the auricular branch of the vagal nerve and raises serotonin levels, both of which have been shown to increase tone in the smooth muscle of the stomach, thus suppressing appetite." In this study, a group of 60 obese subjects were split into two groups, with only one of the groups receiving acupuncture treatment. The treatment consisted of a simultaneous stimulation of the Shen Men and Stomach points. The results showed that the acupuncture group was more likely to experience a reduced appetite and to lose weight than the control group. Another study published in the journal Medical Acupuncture in 2003 found similar results, with the experimental group losing three times more weight than the control group.

Skeptics point out that the placebo effect -- a term used to describe the phenomenon of something working because you believe it's going to work -- is an possible explanation for all of these positive results. Some of the more amusing skeptics offer up pain as the reason why ear stapling may result in weight loss -- if you've got a staple in your ear, you're going to be too focused on how much it stings to remember you want to eat.

Whether you think it's going to work or not, there are some things to keep in mind if you're thinking about giving ear stapling a shot. First, piercing anything on your body can lead to an infection, and piercing cartilage increases this risk. Also, piercing can be a big deal if you hit a nerve or other important body structure. So don't take the procedure lightly. Second, ear stapling is not well regulated (if it's regulated at all). Don't just walk into somebody's house who has a medical-looking setup and submit to getting stapled. Find someone who is a certified acupuncturist trained specifically in ear stapling. And most of all, remember that even the most ardent supporters of ear stapling say it works best if you also eat healthy and keep yourself active. It's likely that you'll achieve similar results if you leave out the staple and just focus on the food and exercise.

For more information on ear stapling, acupuncture, weight loss and related topics, see the next page.

Motorized 'Spermbots' Could Help Treat Cervical Cancer
Could Phage Therapy Fight Superbugs?
What is the future of regenerative medicine?