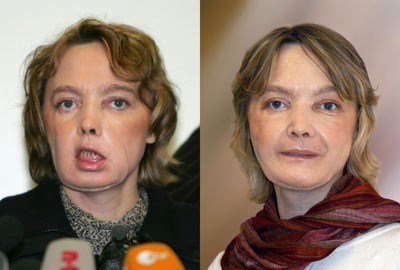 Isabelle Dinoire, the first face transplant recipient, a few months after her operation and a year later
Denis Charlet/AFP/Getty Images

The next step was transplanting part of a face from a donor. The recipient of the world's first partial face transplant was a 38-year-old Frenchwoman named Isabelle Dinoire. In May 2005, Dinoire took sleeping pills and passed out on her couch. When she awoke and tried to light a cigarette, she was surprised to find that it would not stay between her lips. A glance in the mirror revealed a horrible sight -- Dinoire's black Labrador had chewed off the lower part of her face, including her chin, lips and much of her nose, leaving her teeth and gums completely exposed. "I couldn't believe what I was seeing -- it was too horrible," she told reporters [source: New York Times]. After the incident, Dinoire was forced to eat pureed food and wear a surgical mask to hide her disfigured face.

Doctors could have taken tissue from Dinoire's chest to repair the damage to her face, but that would have left her with very little movement. Instead, surgeons Bernard Devauchelle and Jean-Michael Dubernard (who had performed the first hand transplant surgery in 1998) stepped in and agreed to give Dinoire a new face. The donor was a 46-year-old woman who had been left brain dead from a suicide attempt.

In November 2005, two medical teams consisting of about 50 professionals gathered to perform the surgery at a hospital in Amiens, France. They removed the donor's face at 10:30 p.m. on a Saturday and finished attaching the graft to Dinoire at about 4 p.m. the next day. Within a week, Dinoire could speak, eat and drink, but doctors said it would likely be several months before she gained sensitivity in her new skin.

In 2006, doctors in China were confronted with an even more challenging case than Dinoire's. Three years earlier, a farmer named Li Guoxing had been trying to shoo a black bear away from his cows when it attacked him. The bear ripped away most of the right side of Guoxing's face. Not only was his skin missing, but also part of the bone in his nose and cheek.

Li Guoxing in July 2006, after the first stage of his face transplant
China Photos/Getty Images

In a surgery that lasted some 15 hours, a team of 18 doctors led by Guo Shuzhong gave Guoxing a new nose, upper lip, cheek and eyebrow from a brain-dead donor. The surgery went without a hitch, and Guoxing's new skin even sprouted facial hair and acne within days of the procedure.

Then in 2007, French doctors performed a third partial face transplant on a 29-year-old man with neurofibromatosis, a disease that causes tumors to grow on nerves throughout the body. Although the man had already undergone more than 30 operations, his face was still so disfigured that he was unable to speak or eat. During the 15-hour operation, doctors gave the man a new nose, mouth, chin and cheeks.

­The success of these three partial face transplants has prompted doctors to attempt the first full-face transplant, which would include an entire face, as well as the ears and hair. In 2004, the Institutional Review Board at the Cleveland Clinic gave doctors there the go-ahead to proceed with the operation. As of 2007, all that was left to do was find the right candidate.­