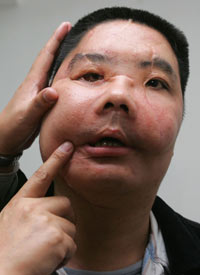 Before face transplant surgery can be performed, doctors need to find the right donor and recipient. Candidates must be physically healthy enough to undergo surgery, and psychologically prepared to handle the emotional stress of undergoing such a huge physical transformation.

The donor also must be carefully chosen. Because the tissues must still be connected to an active blood source, the donor has to be alive on life support, but brain dead with no hope of recovering. Doctors try to match recipients with a donor of a similar age and skin tone. More important is matching the blood and tissue, because a poor match will end in the recipient rejecting the new tissues.

To find a good match, doctors use a test called HLA typing, which looks for proteins called antigens on the surface of tissues. Antigens are what stimulate the body's immune system to launch an attack and reject foreign tissue. Tissue type is based on a pattern of antigens. Everyone has a different pattern, with the exception of identical twins, who share the same pattern (which is why organ donation is a relatively smooth process in twins). The closer the antigens match, the less likely that the recipient will reject the transplanted tissue. (In Isabelle Dinoire's case, doctors actually went a bit further -- they gave her an infusion of bone marrow stem cells from the donor to prepare her immune system and reduce the odds of rejection.)

During the surgery, doctors first cut and peel away the donor's face. How much of the face is removed and transplanted is based on whether the procedure is a partial or full face transplant (as of 2007, only partial face transplants have been performed). Depending on the extent of the damage to the recipient's face, the surgeons will take not only the skin but also the underlying fat, muscle, cartilage, nerves, arteries and veins. Some patients (like Li Guoxing in China) will need replacement bone as well.

Once the face is removed from the donor, a medical team will transport it on ice to the recipient waiting in another hospital operating room. Before the transplant tissue arrives, doctors will have removed the remaining damaged skin and muscle from the recipient's face to make way for the new tissue.

Using microscopic needles and thread, surgeons will first connect arteries and veins to the new tissue to supply it with the oxygen-rich blood it needs to live. They don't need to connect all of the arteries and veins -- just a few will ensure that enough blood flows to the face. The surgeons will also connect the nerves and muscles so that the patient has feeling and movement in his or her face. Doctors will drape the donor's face over the recipient's skull, adjust it to fit and sew it into place. The recipient will have to take immunosuppressant drugs for the rest of his or her life to prevent tissue rejection.

On the next page, we'll learn about the many risks and controversies surrounding face transplant surgery.

A face transplant isn't your everyday surgery. It's an extremely complex and delicate procedure requiring skill and extensive training. So it's no surprise that surgeons who have undertaken this operation have wanted to practice their technique before trying it out on a real human being.

In China, doctors practiced on more than 50 rabbits and 10 human cadavers before operating on Li Guoxing. At the Cleveland Clinic, where doctors have been gearing up to perform the first full face transplant, they have tested out similar transplantation techniques on rats and cadavers.