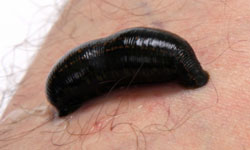 Leeches have been used in medical procedures since ancient times. Sometimes effectively, sometimes not.
Hemera/Thinkstock

"Leeches!!" Anyone who remembers the scene in the 1986 classic movie "Stand by Me" -- in which the young River Phoenix, Corey Feldman and Jerry O'Connell flail and screech in the mud, flinging the blood-sucking creatures from their arms, backs, legs and...other places -- is justified in believing that these slimy, segmented worms' sole reason for existing is to make people recoil in disgust at the very sight of them. But believe it or not, leeches also serve an important purpose in the medical field.

In ancient Greece and 19th-century Europe, leeches were the predominant medical device for bloodletting, a procedure by which practitioners sought to help balance the body's "humors" (phlegm, blood and bile) by simply allowing the subject to bleed for a bit. Bloodletting was prescribed to treat a variety of conditions, from a black eye, headache and fever to obesity and melancholia, and in 1883, French medical professionals imported more than 40 million leeches for this purpose [sources: Rubin, Mestel].

These days, leeches are used to help heal skin grafts -- the process for treating burns in which blood tissue is transferred from one part of the body to another -- by removing blood pooled under the graft and restoring blood circulation in blocked veins. They've also been used in reattaching fingers and other body parts [sources: MSNBC, PBS].

To feed, a leech attaches itself to a human or animal through suckers at each end of its body and then eats its host's blood. Leeches can eat six to eight times their body weight, but rather than sinking to the bottom of the body of water they live in because of such a fully belly, leeches produce a natural anticoagulant or blood thinner, which keeps the blood in them from thickening and clotting and allows them to stay mobile [source: PBS].

The anticoagulant is also useful to patients in a grafting or reattachment procedure. A doctor attaches a leech to the skin near the graft or reconnected digit. As the leech feeds, it releases the blood thinner into the patient's soft tissue, preventing clotting and allowing for continuous blood circulation, which is necessary for the procedure to be successful. When the leech fills with blood, it eventually falls off, but the patient continues to bleed, allowing for continued circulation and new vein growth. Depending on the nature of the procedure, leeches are typically used constantly (replaced as they drop off every 20 minutes or so) for up to two days and then often intermittently for a few days following the procedure [sources: PBS, Rubin].

The use of medicinal leeches -- hirudo medicinalis, as they're known among physicians -- has created a niche industry for producers and distributors of the slippery subjects. In 2004, the U.S. Food and Drug Administration approved French firm Ricarimpex SAS to market leeches as medical devices. The company joined a handful of others that have been providing medicinal leeches in the states since at least 1975. Leeches U.S.A., for example, sells medicinal leeches across the country for between $9 and $12 apiece. The worms are typically stored on site in a hospital refrigerator [sources: MSNBC, Leeches U.S.A.].

For patients who are less than keen about the idea of a slimy sucker crawling on their skin there are a couple of ways in which doctors cut down on the ick factor. As the nerves around the area treated in graft or reattachment surgery are typically numbed and leeches naturally produce an anesthetic, the patient is unlikely to actually feel the creature crawling on his or her skin. In addition, medicinal leeches can be applied to the treated area using a plastic syringe, which also cuts down on skin contact. Finally, doctors usually place a gauze barrier around the treatment area to prevent the leech from wandering to other parts of the body [source: BERF].

Specific steps are also taken to ensure medicinal leech treatment is done hygienically. Before setting the gauze barrier, a medical professional thoroughly cleans the patient's skin with soap and water and then rinses it with distilled, non-chlorinated water. During treatment, doctors will check regularly for infection and monitor the patient's hemoglobin (the red blood cell molecule that carries oxygen from the lungs to the body's tissues and returns carbon dioxide from the tissues to the lungs) levels to ensure that the blood loss does not harm the patient [source: Leeches U.S.A.].

For more information on how leeches are used in modern medicine, check out the links on the next page.

Many doctors apply disinfected maggots to wounds in an effort to liquefy dead tissue, kill harmful bacteria and stimulate healing. The treatment was developed by military surgeons who discovered that soldiers with maggot-infested wounds fared better than other wounded soldiers who had not been infested [source: Rubin.