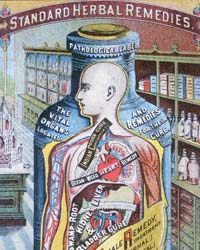 ­Researchers, doctors and laymen alike have long known of the power of the placebo. When people believe a sugar pill is going to cure their ills, they tend to feel better after taking one. Of course, if the malady is more serious than a head cold or anxiety, a sugar pill may trick your mind into believing in its curative powers, but the rest of the body won't be so easily be fooled.

The placebo effect depends upon the hyping and selling of a worthless bill of goods, and that's something that charlatans can deliver. Once you have a crowd believing that your jar of colored water will cure all their aches and pains, statistically about one-third of those who buy your product will be completely satisfied and spread the news of your miracle cure for you. By the time the remaining two-thirds catch on, you -- the fraud -- have moved on to the next town, the next cure or the next world.

For thousands of years, there wasn't much of a difference between scientific medical practices and medical quackery. The world was flat, the sky was poked full of holes and your diseases were caused by demons inside of you. There were many, many opinions on how to get those demons out.

Sometimes the practitioners believed in the miracle cures being touted, and sometimes fame and acclaim were the motivating factors (the money was just a nice benefit). Regardless, some medical quackeries throughout history stand out from the rest, and we'll look at 10 of those in this article. Take our word for it: This article will leave you feeling satisfied, refreshed and miraculously healthy.