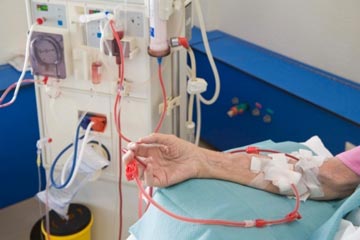 Imagine that you have multiple sclerosis (MS). This autoimmune disease causes your body's immune system to attack healthy cells, eventually leading you to lose control of the muscles in your limbs. Besides exercise and physical therapy to keep muscles as strong as possible, you don't have many options for treatment; however, a plasmapheresis procedure may offer hope for people suffering from MS and other autoimmune disorders.

In the 1970s medical researchers explored alternative treatments for autoimmune disorders that could help reduce the amount of medication patients had to take. One method that researchers discovered was plasmapheresis.

When a patient undergoes plasmapheresis procedure, plasma, the fluid part of the blood, is removed from blood cells by a cell separator. The separator spins blood at a rapid speed to separate blood cells from the plasma, or it passes the blood through a membrane with pores so tiny that only plasma can fit through. Cells are put back in the body while the plasma is disposed of and replaced with other liquids such as a saline and albumin combination, fresh frozen plasma, or a plasma substitute [source: Myasthenia Gravis Foundation of America] In a method similar to kidney dialysis treatment, this procedure removes auto-antibodies, contained in the plasma, from blood [source: Muscular Dystrophy Association].

Plasmapheresis procedures have been proven effective as treatment for autoimmune diseases that affect the limbs such as Lambert-Eaton syndrome, myasthenia gravis, chronic demyelinating polyneuropathy and Guillain-Barré syndrome. Its use as treatment for multiple sclerosis, polymyositis and dermatomyositis has not been determined [source: Muscular Dystrophy Association]. In addition to autoimmune disorders, plasmapheresis procedures can be used to treat patients with neurological disorders, blood toxins and high levels of cholesterol that can’t be controlled by medicine or diet [source: de la Rocha].

On the next page, we'll take a look at the experience of a patient during a plasmapheresis procedure and the complications to look out for if you're undergoing the treatment.

A plasmapheresis procedure is an outpatient treatment; the average patient will have six to 10 treatments over a period from two to 10 weeks, and each procedure takes several hours [source: Muscular Dystrophy Association]. While a patient might find the procedure uncomfortable, it is usually not painful. Improvement sometimes can be seen within a few days, particularly if the procedure is used as a treatment for myasthenia gravis, a disease that weakens the body's muscles; however, sometimes it takes weeks to see improvement [source: Muscular Dystrophy Association].

When undergoing plasmapheresis procedure, a patient sits in reclining position in bed or chair. A thin tube is placed in a large vein in the arm, and another small tube is placed in the other hand or foot. Blood goes out one tube and is returned in the other. The blood outside of the body is much less than what the average person would donate to a blood bank in one sitting. Autoimmune disease drugs are administered as a part of the patient's regular medication routine in lower doses than if the patient was not undergoing plasmapheresis.

Although plasmapheresis procedures are safe, like any other medical treatment, complications can occur. If a patient's blood pressure drops, medical technicians will lower the patient's head, lift his or her legs and administer intravenous fluid. Symptoms of a drop in blood pressure include faintness, blurred vision, sweating, coldness, dizziness and cramps in the abdomen.

A patient can also bleed excessively after the procedure as a result of receiving medications to keep blood from clotting. Since blood loss can lead to seizures or irregular heartbeat, this complication should be treated immediately.

If a patient is allergic to solutions or equipment used in the procedure, medical technicians will stop the treatment and give the patient intravenous medication. Symptoms of allergic reactionsinclude itching, wheezing and the development of a rash.

What will medicine consider unethical in 100 years?
Why Do Antidepressants Have Warnings About Suicidal Thoughts?
Scientists Develop World's First Color 3D X-rays