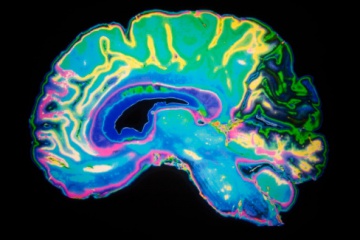 Researchers supported by NIMH and other NIH Institutes are scrutinizing the structures and functions of the brain for clues as to how a brain with autism differs from the normal brain.
Hemera/Thinkstock

It is generally accepted that autism is caused by abnormalities in brain structures or functions. Using a variety of new research tools to study human and animal brain growth, scientists are discovering more about normal development and how abnormalities occur.

The brain of a fetus develops throughout pregnancy. Starting out with a few cells, the cells grow and divide until the brain contains billions of specialized cells, called neurons. Research sponsored by the National Institute of Mental Health (NIMH) and other components at the NIMH is playing a key role in showing how cells find their way to a specific area of the brain and take on special functions. Once in place, each neuron sends out long fibers that connect with other neurons. In this way, lines of communication are established between various areas of the brain and between the brain and the rest of the body. As each neuron receives a signal it releases chemicals called neurotransmitters, which pass the signal to the next neuron. By birth, the brain has evolved into a complex organ with several distinct regions and subregions, each with a precise set of functions and responsibilities.

But brain development does not stop at birth. The brain continues to change during the first few years of life, as new neurotransmitters become activated and additional lines of communication are established. Neural networks are forming and creating a foundation for processing language, emotions, and thought.

However, scientists now know that a number of problems may interfere with normal brain development. Cells may migrate to the wrong place in the brain. Or, due to problems with the neural pathways or the neurotransmitters, some parts of the communication network may fail to perform. A problem with the communication network may interfere with the overall task of coordinating sensory information, thoughts, feelings, and actions.

On the next page, learn more about autism brain studies and research.

Researchers supported by NIMH and other NIH Institutes are scrutinizing the structures and functions of the brain for clues as to how a brain with autism differs from the normal brain. In one line of study, researchers are investigating potential defects that occur during initial brain development. Other researchers are looking for defects in the brains of people already known to have autism.

Scientists are also looking for abnormalities in the brain structures that make up the limbic system. Inside the limbic system, an area called the amygdala is known to help regulate aspects of social and emotional behavior. One study of high-functioning children with autism found that the amygdala was indeed impaired but that another area of the brain, the hippocampus, was not. In another study, scientists followed the development of monkeys whose amygdala was disrupted at birth. Like children with autism, as the monkeys grew, they became increasingly withdrawn and avoided social contact.

NIMH grantees are also exploring differences in overall brain function, using a technology called magnetic resonance imaging (MRI) to identify which parts of the brain are energized during specific mental tasks. In a study of adolescent boys, NIMH researchers observed that during problem-solving and language tasks, teenagers with autism were not only less successful than peers without autism, but the MRI images of their brains showed less activity. In a study of younger children, researchers observed low levels of activity in the parietal areas and the corpus callosum. Such research may help scientists determine whether autism reflects a problem with specific areas of the brain or with the transmission of signals from one part of the brain to another.

Each of these differences has been seen in some but not all the people with autism who were tested. What could this mean? Perhaps the term autism actually covers several different disorders, each caused by a different problem in the brain. Or perhaps the various brain differences are themselves caused by a single underlying disorder that scientists have not yet identified. Discovering the physical basis of autism should someday allow us to better identify, treat, and possibly prevent it.

What causes normal brain development to go awry? Some NIMH researchers are investigating genetic causes-the role that heredity and genes play in passing the disorder from one generation to the next. Others are looking at medical problems related to pregnancy and other factors.

It appears that parents who have one child with autism are at slightly increased risk for having more than one child with autism. This also suggests a genetic link. However, autism does not appear to be due to one particular gene. If autism, like eye color, were passed along by a single gene, more family members would inherit the disorder. NIMH grantees, using state-of-the-art gene splicing techniques, are searching for irregular segments of genetic code that the autistic members of a family may have inherited.

Some scientists believe that what is inherited is an irregular segment of genetic code or a small cluster of three to six unstable genes. In most people, the faulty code may cause only minor problems. But under certain conditions, the unstable genes may interact and seriously interfere with the brain development of the unborn child.

A body of NIMH-sponsored research is testing this theory. One study is exploring whether parents and siblings who do not have autism show minor symptoms, such as mild social, language, or reading problems. If so, such findings would suggest that several members of a family can inherit the irregular or unstable genes, but that other as yet unidentified conditions must be present for the full-blown disorder to develop.

Pregnancy and other problems. Throughout pregnancy, the fetal brain is growing larger and more complex, as new cells, specialized regions, and communication networks form. During this time, anything that disrupts normal brain development may have lifelong effects on the child's sensory, language, social, and mental functioning.

For this reason, researchers are exploring whether certain conditions, like the mother's health during pregnancy, problems during delivery, or other environmental factors may interfere with normal brain development. Viral infections like rubella (also called German measles), particularly in the first three months of pregnancy, may lead to a variety of problems, possibly including autism and retardation. Lack of oxygen to the baby and other complications of delivery may also increase the risk of autism. However, there is no clear link. Such problems occur in the delivery of many infants who are not autistic, and most children with autism are born without such factors.

For more information about autism, autism treatments and more, see the links on the next page.

Room Color Could Affect Whether You Ace Your Exam
How 17 Equals 49.6: The Amazing Multiplying Women
Living in Racist Community Linked to Health Issues for Blacks, Whites Alike