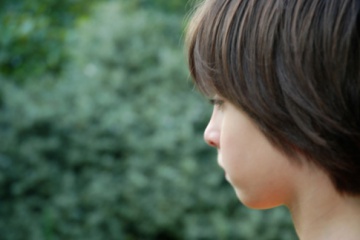 Children with autism either don't speak, or have delayed language development and speak in unusual ways.
Hemera/Thinkstock

By age 3, most children have passed several predictable milestones on the path to learning language. One of the earliest is babbling. By the first birthday, a typical toddler says words, turns when he hears his name, points when he wants a toy, and when offered something distasteful, makes it very clear that his answer is no. By age 2, most children begin to put together sentences like "See doggie," or "More cookie," and can follow simple directions.

Research shows that about half of the children diagnosed with autism remain mute throughout their lives. Some infants who later show signs of autism do coo and babble during the first 6 months of life. But they soon stop. Although they may learn to communicate using sign language or special electronic equipment, they may never speak. Others may be delayed, developing language as late as age 5 to 8.

Those who do speak often use language in unusual ways. Some seem unable to combine words into meaningful sentences. Some speak only single words. Others repeat the same phrase no matter what the situation.

Some children with autism are only able to parrot what they hear, a condition called echolalia. Without persistent training, echoing other people's phrases may be the only language that people with autism ever acquire. What they repeat might be a question they were just asked, or an advertisement on television. Or out of the blue, a child may shout, "Stay on your own side of the road!" — something he heard his father say weeks before. Although children without autism go through a stage where they repeat what they hear, it normally passes by the time they are 3.

People with autism also tend to confuse pronouns. They fail to grasp that words like "my," "I," and "you," change meaning depending on who is speaking. When Alan's teacher asks, "What is my name?" he answers, "My name is Alan."

Some children say the same phrase in a variety of different situations. One child, for example, says "Get in the car," at random times throughout the day. While on the surface, her statement seems bizarre, there may be a meaningful pattern in what the child says. The child may be saying, "Get in the car," whenever she wants to go outdoors. In her own mind, she's associated "Get in the car," with leaving the house. Another child, who says "Milk and cookies" whenever he is pleased, may be associating his good feelings around this treat with other things that give him pleasure.

It can be equally difficult to understand the body language of a person with autism. Most of us smile when we talk about things we enjoy, or shrug when we can't answer a question. But for children with autism, facial expressions, movements, and gestures rarely match what they are saying. Their tone of voice also fails to reflect their feelings. A high-pitched, sing-song, or flat, robot-like voice is common.

Without meaningful gestures or the language to ask for things, people with autism are at a loss to let others know what they need. As a result, children with autism may simply scream or grab what they want. Temple Grandin, an exceptional woman with autism who has written two books about her disorder, admits, "Not being able to speak was utter frustration. Screaming was the only way I could communicate." Often she would logically think to herself, "I am going to scream now because I want to tell somebody I don't want to do something." Until they are taught better means of expressing their needs, people with autism do whatever they can to get through to others.

See the next page to learn more about autism.