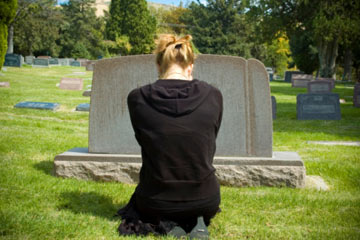 The sudden death of a loved one can trigger reactive depression in surviving relatives.
iStockphoto/Thinkstock

"Garbage in, garbage out" is a phrase used for computer inputs and outputs, but it works for describing depression, too. Often the bad or negative events that happen in our lives on the outside -- the garbage -- have an effect on our insides. Health suffers, sleep is disrupted and the brain changes as the garbage comes in -- much like an input of data going into a computer. Our brains handle the processing of all of the events of our lives and what comes out of us may be a release of some of that garbage in a healthy way.

Sometimes, however, it comes out, or manifests itself, in depression. So much has happened or been taken in that the brain and body settle into a depressed state, and it can stay there for the short term or the long term. Depression has many causes, symptoms and forms, and sometimes it's even a result of good events happening in our lives. A baby's birth may be joyous and overwhelming at the same time, for instance, and it's not so much a case of "garbage in" but more of an adjustment to all of the life changes that come with having a baby. There's just a lot of new "stuff" to deal with.

Reactive depression is a short-term variety, and it's also called situational depression or adjustment disorder. All three ways of referring to this type of depression -- "relational," "situational" and "adjustment" -- help describe how and what it is: a depression resulting from a situation that occurs, or that's related to events in a person's life, that requires a time of adjustment to handle the changes and implications.

Clinical, or major depression, is often chemical; the brain doesn't have the needed chemical balance to right itself. There may be too much or too little of the components that control moods and correction requires medication and/or professional therapy to achieve balance and beat the depression. Sometimes, depression needs to be managed long-term with continual adjustments of medications and psychotherapy to keep depression at bay depending on other factors in a person's life.

How can you tell the difference between reactive and clinical depression? We'll look at some causes and symptoms, next.

Reactive depression is considered a "stress-related mental illness;" it's a reaction to the stress brought on by circumstances such as getting a divorce, losing a job or having a death in the family. Going away to college, relocating or downsizing and moving from home to a long-term care senior facility are other significant life events that can cause a great deal of stress. Often, we can adjust naturally to big life changes and emotions and stress levels normalize over the course of a few months. When the depression lingers or brings self-destructive or self-sabotaging behaviors, an adjustment disorder has likely set in and medication and therapy may be needed. This treatment is often short-term [source: Mayo Clinic].

Symptoms of reactive depression appear within three months of the events that trigger them, and they can be behavioral or emotional. Behavioral changes bring on a general inability to manage your life and can include the following:

Emotional changes are similar to those of depression in general and include:

Adults, teenagers and children of both sexes can suffer from reactive depression. People of all ages experience stressful events. For example, when a family makes a cross-country or international move to a new home, children and adults need to adjust to leaving behind family and friends or schools and churches and face starting over. It can be overwhelming for everyone, but each person will adjust at his own pace and with different degrees of stress. Women are twice as likely to have situational disorders, or reactive depression, and teenagers are at greater risk of developing long-term problems, but the severity will depend on the individual [source: Mayo Clinic].

How can you determine if depression is settling in for the long term or is reactive? By working together with your doctor. We'll look at how to track symptoms and diagnose reactive depression, next.

Similar to reactive depression, post-traumatic stress disorder, or PTSD, results from events happening in a person's life. Most often, however, PTSD involves a significant, horribly frightening or violent attack or a series of them -- for example in cases of domestic abuse. PTSD can be short-lived when addressed early and can even resolve on its own over time, but some cases affect individuals for months or years and can become permanent. Reactive disorder also differs because it's most often less severe in its manifestation. PTSD can involve terrifying nightmares, flashbacks and feelings of reliving the events again and again, and it can be triggered by people or objects that remind the victim of the original events [source: Mayo Clinic].

Research on reactive depression hasn't narrowed down the cause or why some individuals develop the disorder versus others, but a person's life experiences, genetics, and even general mood or temperament are likely influential. Earlier we mentioned some singular or one-time stressful events that can bring on adjustment disorders, but it also can settle in as a result of ongoing stress. Prolonged financial problems, living in a dangerous neighborhood or battling chronic illness can bring on reactive depression all of a sudden after a crisis moment or during a breakdown. It also may be more likely to set in for people who grew up under difficult circumstances, such as in abusive families or those mired in substance abuse [source: Mayo Clinic].

All of these factors are worth mentioning to a professional trained to diagnose depressive disorders or to a physician who can refer you to a psychiatrist or counselor. In some cases, it's essential to get help right away, especially if you, a friend or a loved one is having suicidal thoughts. As mentioned briefly, teens are also at increased risk for longer-lasting reactive depression, which may have something to do with hormones, as well as with the general stressfulness of being a teenager and experiencing the ups and downs of school and making decisions about the next steps into young adulthood. Situational depression actually can increase the risk of bipolar disorder and schizophrenia, as well as antisocial behaviors or withdrawal in teens [source: Mayo Clinic].

If you or someone you know is having thoughts of suicide, get help immediately through 911 or your local emergency response agency.

Reactive depression often just subsides over time, but if the symptoms seem to be hanging on without an improvement, seek help from a doctor and before the appointment, keep track of thoughts, moods and behaviors that can help in diagnosing the problem. According to the Diagnostic and Statistical Manual of Mental Disorders, reactive depression will include all of these factors: having behavioral or emotional problems within three months of experiencing a stressful event; having more stress than is considered normal in response to a problem or event; and having symptoms subside or go away within six months after a stressful incident [source: Mayo Clinic]. A timeline of symptoms and even a general description of how long you've been in a funk or a mood you can't get out of can help in diagnosis. If depression persists beyond six months, the disorder is likely chronic and not reactive.

If all of the detailed questions and answers with a physician or mental health professional do confirm reactive depression, should you wait it out or seek treatment? We'll look at options, next. 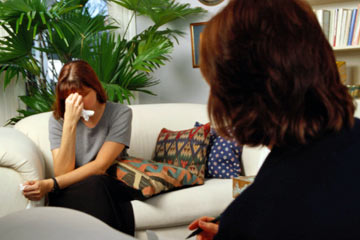 Psychotherapy and counseling are some of the most common forms of treatment for reactive depression.
David Buffington/Getty Images

As the events and life changes that caused the reactive depression resolve, often, so does the reactive depression. A short course of medication or antidepressents can be very effective in reducing depressive symptoms and is discontinued after the stress-related illness has showed signs of resolving. Depending on the severity of the depression, the length of time present and the recommendation of your doctor, treatment or management without treatment can include:

If you know that a stressful event or big life change is coming and have some time to plan, you also can work to decrease the chances of getting reactive depression. One method includes recording all of the aspects of the stressor that you most dread or fear will impact your life negatively and work on planning for them in advance. Just as external events impact our mind set, being able to arrange and prepare our physical environments ahead of time can relieve the stress before it builds. A family moving to a new state might try turning the focus of school-aged children away from leaving friends and teachers behind and toward area attractions in the new home.

If big changes of any kind are pending and you can plan, try not to get worn down in the details. Adequate rest rather than exhaustion can greatly impact how frazzled and out of sorts you'll be when the stress hits. If facing an unexpected major life change, many advise facing it head on, but there's probably a reason we're told to sit down before getting big news: It gives us pause and rests our bodies. Devastating news or events can trigger reactive depression, but taking a pause to hear and allow the change to sink in instead of charging into the stress of planning and recovery may help better prepare the body and mind for the stress and ultimate healing to come.

Survivor Guilt: Living Through Major Trauma
Can depression cause heart attacks?
What is atypical depression?

Suicide Afflicts Farmers at Rate Shockingly Higher Than All Other Jobs
Does depression run in families?
Why are alcohol and depression so commonly linked?