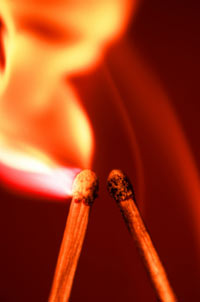 "Fire became a part of my vocabulary in preschool days … Each summer, I would look forward to the beginning of fire season as well as the fall … I may feel abandoned, lonely, or bored, which triggers feelings of anxiety or emotional arousal before the fire … I want to see the chaos as well as the destruction that I or others have caused … [After the fire is out] I feel sadness and anguish and the desire to set another fire."

While most people have some fascination with fire, the curiosity usually wanes with age and with a firm understanding of the dangers of fire. However, some individuals, like Sarah Wheaton -- who was a college student when she was admitted to a psychiatric hospital for compulsive fire-setting -- have a lifelong fascination with fires and an irresistible impulse to set them. This behavior is called pyromania; many myths, misconceptions and controversies surround it, and psychiatrists disagree about whether it's truly a disease.

In this article, we'll examine pyromania. What is it? How common is this behavior? How is it different from arson? What causes it, and how can it be treated?

According to the American Heritage Dictionary, pyromania is "the uncontrollable impulse to start fires." This definition seems simple enough, but it's often difficult to apply when diagnosing an individual's fire-setting behavior and corresponding psychiatric treatment. There are many reasons that a person might set fires, and the difficulty comes in separating those who truly have an impulse to set fires from those who display criminal behaviors or other psychological disorders. To address this issue, the American Psychiatric Association's Diagnostic and Statistical Manual of Mental Disorders (DSM-IV) has set forth the following criteria for a diagnosis of pyromania:

So, t­o make a diagnosis of pyromania, the psychiatrist must know that the individual has set multiple fires (on multiple occasions), is tense or aroused before setting fires and is released from that tension after the fire. Furthermore, the individual must not exhibit intoxication, criminal motivation or other criminal/psychiatric disorders. When all other reasons have been ruled out, what remains must be pyromania.

So, according to these criteria, did Sarah Wheaton actually have pyromania? Because she was diagnosed with borderline personality disorder (with a subsequent history of fire-setting behavior), she did not fit the definition of true pyromania. So, by applying the DSM-IV criteria, how common is pyromania?

Why is the definition of pyromania so specific?

Psychiatrist Jeffrey Geller and colleagues reviewed medical and legal literature on pyromania over a 150-year span [source: Geller]. They found that during some periods, there were frequent diagnoses of pyromania, while at other times there were very few. They noted that the definition of pyromania had changed several times since the mid-1800s -- sometimes it was recognized as a mental illness, sometimes it wasn't and sometimes there seemed to be no conclusion. Geller and his colleagues concluded that the reasons for these changes did not reflect differences in the behavior itself, but rather shifts in the field of psychiatry, as each generation attempted to sort out whether an individual is truly responsible for his or her own actions.

How common is pyromania?

How common is pyromania? This is a difficult question because acts of pyromania are included in arson statistics reported by law enforcement agencies. So, to find cases of pyromania, forensic psychiatrists must evaluate arson case reports and examine arsonists who are imprisoned or in psychiatric hospitals.

Psychiatrist Nina Lindberg and her colleagues in Finland reviewed 20 years of medical records and psychiatric evaluations of 600 male arsonists. ­Most of the arsonists had mental disorders, including personality disorders, psychoses and mental retardation. About 68 percent of them had been drunk when they set their fires. The researchers separated the group into criminal arsonists and pure arsonists (those with no other criminal activity) because true pyromaniacs would likely be pure arsonists. Upon applying the DSM-IV criteria for pyromania, the researchers found that only 12 of the 600 met the criteria. However, nine of that 12 had admitted to being drunk when they set fires (they mentioned that the tension and arousal that they felt before fire-setting was increased by drinking alcohol). Therefore, Lindberg and colleagues concluded that less than 2 percent of arson and fire-setting behavior was actually due to pyromania [source: Lindberg].

In debunking the myth that most serial arsonists are pyromaniacs, psychologist Rebekah Doley reviewed several pyromania studies and reported that true pyromania is actually quite rare (accounting for less than 1 percent to about 4 percent of arsons) [source: Doley].

So, if pyromania is such a rare disorder, how much do we know about its causes?

Arson is "the criminal act of maliciously burning the building or property of another, or of burning one's own for some improper purpose, as to collect insurance" [source: American Heritage Dictionary]. According to 2006 FBI statistics, various U.S. law enforcement agencies reported arson rates at about 26.8 per 100,000 inhabitants [source: FBI]. The National Fire Protection Association and FEMA estimated that in 2006, there were 31,000 structural fires set, which resulted in 305 deaths and about $755 million in damages. Arson is a major source of property damage in many countries. For example, in Australia, it's estimated that a fire is lit every hour of every day, yielding $157 million in damages annually [source: Insurance Information Institute]. So, while both pyromania and arson involve setting fires, the major difference between the two is the motivation. Arsonists have some criminal motivation or gain, while pyromaniacs do not.

Because pyromania is such a rare disorder, we don't know much about its biological causes. Pyromania is generally classified as an impulse control disorder (ICD), along with pathological gambling, kleptomania and addictions. We don't know what sparks most ICDs, but they don't go away on their own accord -- patients need medical and psychiatric treatment.

Of the ICDs, pathological gambling and kleptomania are the best studied [source: Dell'Osso]. Here, the serotonin centers of the brain seem to be affected. So, most treatments involve behavioral therapy (like biofeedback) in combination with pharmacologic treatments with selective serotonin reuptake inhibitors (see How Antidepressants Work). But, in contrast to other ICDs, pyromania is often treated with behavioral therapy.

In a 2006 letter to the editor of the Journal of Clinical Psychiatry, psychiatrist Jon Grant reported a case of one patient who fit the clinical definition of pyromania. Grant was able to examine the brain of this patient with SPECT imaging and found a region in the left inferior frontal portion that had a low blood flow [source: Grant]. The patient underwent three weeks of daily behavioral therapy and a daily regimen of topiramate, an anticonvulsant used to treat seizures, for 12 months. During that time, the patient reported a substantial decrease in his urge to set fires. When Dr. Grant reimaged the patient's brain, the problem was gone. The patient continued to be symptom-free while on the medication. This is the first report of a possible biological cause for pyromania and combination drug and behavioral treatment for it.

So, much about pyromania remains a mystery. Psychiatrists still debate whether it is a real mental illness or not. We do know that many people confuse pyromania with arson and that, according to its clinical definition, it's extremely rare. Recent reports suggest that there may be a biological cause and possible pharmacological treatment, but it's too early to tell.

For more information about pyromania, check out the links on the next page.