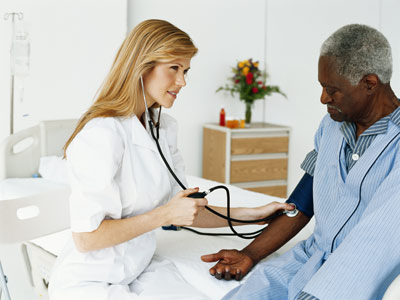 The main risk factor for both kinds of stroke is high blood pressure, consistently elevated above 140/90 mmHg (millimeters of mercury) [source: Ward]. This risk factor, which can be controlled with medication, is present in 70 percent of all occurrences of stroke [source: Appel and Llinas].

If you're at risk for heart disease, you've likely heard about steps such as quitting smoking, lowering cholesterol, becoming more active with exercise and eating a healthy diet to fight obesity. Working to address these issues not only wards off heart disease, but eliminates many of the major risks for stroke as well, simply because an ischemic stroke and a heart attack are so similar in cause.

Heart disease in and of itself is a risk factor for stroke because the heart's ability to pump blood becomes compromised. But, these factors for heart disease are also factors for stroke as well. For example, smokers have a 50 percent higher risk of stroke than nonsmokers, but that risk is eliminated within five years of quitting [source: Appel and Llinas].

Diabetics face three times the risk of stroke, but this also can be controlled by keeping their blood sugar count in check [source: Appel and Llinas]. Individuals with atrial fibrillation, a condition in which the heart doesn't pump properly, face an increased risk of ischemic stroke because the irregularly pumped blood pools and forms clots. This can also be addressed with medication.

Of course, some factors are out of a person's control, but simply being aware of them is important. If a close family member has suffered a stroke, then your risk increases. The chance of a stroke also increases with age -- between the ages of 55 and 85, risk of a stroke doubles every 10 years [source: Appel and Llinas]. Men have a higher stroke risk than women until later years, when the odds even out a bit. Race also plays a role. Blacks have twice the incidence and mortality rate from stroke than whites [source: Appel and Llinas]. It's possible that this gap may be explained by socioeconomic factors, such as poverty [source: New York Times]. Among both blacks and whites, socioeconomic factors matter, with impoverished areas in South Carolina, Arkansas, Tennessee and Georgia having the highest stroke fatality rates in the United States [source: New York Times].

So now you know whether you're at risk for a stroke, but how do you know when your brain is actually under attack? Read the next page for a list of stroke symptoms.

If the risk factors for a stroke relate to lifestyle choices that include poor diets and smoking, then newborns are safe, right? Wrong. The rate of stroke in newborns is 1 in 5,000, the same as the stroke rate in adults over the age of 75 [source: Sternberg]. That's due to the makeup of newborns' blood. It's twice as dense as an adult's, and flows more slowly, which can lead to clotting. Newborns may also have heart defects that cause the blood to pool around the heart.

It's harder to diagnose a stroke in a child, sometimes because it's simply hard to believe that someone so young could have one. Because diagnosis is difficult, these statistics may not be exact, but it's believed that strokes occur in three of every 100,000 young people between the ages of 1 month and 18 years [source: Sternberg]. The strokes are evenly split between ischemic and hemorrhagic, but what makes treatment especially difficult is that the medication used to treat strokes is only approved for adult use.