Can you die if you don’t sleep? 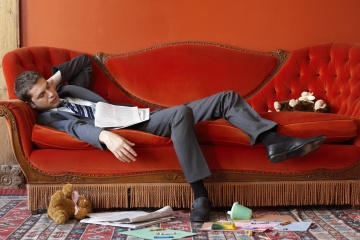 Life seems so fast-paced nowadays that getting an adequate amount of sleep is an elusive goal for many. Just how much sleep can you live with, or without?
Christopher Robbins/Thinkstock

Lack of sleep may leave you feeling like death, but can it actually kill you? While too little sleep can eventually contribute to your death, there's little evidence to suggest you'd kick the bucket right away.

If an extended period of non-sleep were to kill you immediately, it would likely be due to an indirect cause, like a car crash or an accident on the job. That's because staying awake for too long alters perception and judgment, leaving you more prone to errors and accidents [source: Harvard Medical School]. After just 18 hours without sleep – say you woke up at 6 am for work and stayed out with friends until midnight – your level of impairment is equal to that of someone with a blood alcohol level of 0.05 percent. By 24 hours of no sleep, you're operating at the same level as someone with a BAC of 0.10 percent [source: Centers for Disease Control and Prevention]. At this level of impairment, it's certainly possible to run into trouble on the road or in the workplace.

Even if you're lucky enough to escape short-term death due to an accident, lack of sleep could still take you down in the end. Chronic sleep deprivation is linked to a host of health effects from obesity to diabetes to cardiovascular disease [source: Harvard Medical School].

Of course, both of these scenarios reflect relatively short periods of wakefulness – you're still getting sleep, just not enough of it. But what if you just flat out stopped sleeping? The longest that a human has ever stayed awake under observation is 11 days, when student Randy Gardner achieved this record as part of a science fair [source: Gillin]. Sources vary on how much the lack of sleep affected Gardner's mental state, but most agree that he recovered within a few days with no long-term effects.

Beyond Gardner's 11-day ordeal, scientists know precious little about how long human can survive with no sleep at all – because in order to properly test this duration, someone would have to die. Even the CIA limits sleep deprivation in detainees to 11 days [source: Miller]. Studies performed on rats estimate that they die after two weeks of no sleep [source: Gillin]. Others suggest that some rats can last as long as 32 days [source: Palmer]. While it's not clear what kills the rats, it could be related to weakening of their immune system, brain damage, stress or even hypothermia brought on by the lack of sleep [source: Palmer].

Will we learn to live without sleep?
How Sleep Deprivation Works
Will you die if you never sleep?

Why is coffee and a nap better than either by itself?
Why Are You So Tired? 5 Most Common Sleep Mistakes
How Fever Dreams Work