Can melatonin help you sleep better? 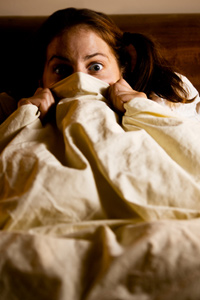 The boogeyman is scary, but he's no match for the melatonin surging through your brain. See more sleep pictures.
© iStockphoto.com/CREATISTA

Bad things happen in the dark. Just ask any child, who knows that monsters appear in the closet and under the bed after lights out. The phrase "a dark and stormy night" is a prerequisite for a good scary story, because night is when ghosts, serial killers and supernatural creatures all make their most haunting appearances. With all these bad things happening at night, how can we fall asleep? Why don't we stay awake and defend ourselves?

It's possible that humans sleep at night because our ancestors needed to be hidden away, snug as a bug in a rug, when nocturnal predators were on the prowl. But even though scientists aren't quite sure of the reason why we sleep at night, they do know that melatonin has something to do with why we get sleepy as the sky goes dark.

Melatonin is a hormone produced by the pineal gland in the brain, which receives its marching orders from the hypothalamus. The human eye, which is connected to the brain via nerve endings, sends messages to the brain when the sky gets darker, helping the hypothalamus keep track of the day's progression. When dusk falls, the hypothalamus alerts the pineal gland to start producing melatonin. Melatonin production continues throughout the night, spiking in the wee small hours and tapering off once it's morning. Though scientists aren't exactly sure how the hormone helps us sleep, it's clear that melatonin is integral to keeping us on a 24-hour-a-day schedule of snoozing when it's dark and waking when it's light.

Blind people don't get these cues, as they can't tell when it's light and when it's dark. As a result, many blind people lack a sleep pattern based on a 24-hour day; instead, their body adopts free-running circadian rhythms that approximate a 25-hour day [source: Goode]. This means that a blind person could be up all night, and then feel an intense need to sleep at a point that moves an hour forward or back every day. In a 1999 study, researchers found that they could use melatonin supplements to regulate a blind person' s circadian clock, so that they fell asleep and woke up at the same time as the general population [source: Goode].

So if we know that melatonin is one of the reasons why we sleep when night falls, and we know that it standardizes the sleeping schedules of a blind person, then could melatonin supplements help those of us with occasional sleeping problems or even more serious sleeping disorders?

Melatonin as a Sleeping Aid 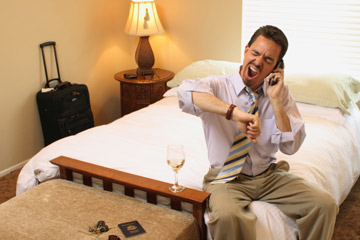 In the United States, melatonin is available as an over-the-counter, natural sleep aid (in Europe, it requires a prescription). Many swear by its effectiveness, particularly those who use it when traveling to different time zones and shift workers who sleep during the daytime. Dig deeper, and you'll find melatonin mentioned as a veritable wonder drug, something that could potentially treat headaches, glaucoma, high blood pressure, inflammatory bowel disease, HIV/AIDS and cancer. In some animals, it has even postponed signs of aging [sources: Medline Plus; CNRS]. All that, and it's natural? Pretty amazing, right?

Not so fast there, sleepyhead. The use of melatonin supplements as a sleeping aid doesn't hold up to the scrutiny of clinical studies. In numerous reviews, researchers have noted that if melatonin does increase the amount of time that a person spends asleep, it's only by a few minutes, a clinically insignificant amount [sources: Bakalar; Buscemi et al.]. It might slightly help those who are confused about whether it's night or day, like shift workers or time zone travelers, but even then, the evidence is minimal.

It's possible that melatonin performs in clinical studies the way your car performs when you take it to the mechanic -- it suddenly refuses to make that scary noise it's been making for days. Just because melatonin's effectiveness hasn't been proven in clinical studies, should we worry about taking something that our body makes naturally? After all, the most common side effects are very similar to those you'd have when you can't sleep anyways; they include headaches, dizziness, nausea and drowsiness. Most of the studies, even when they can't show efficacy, point out that short-term use of melatonin appears to be safe for most people.

However, those same studies include the disclaimer that almost nothing is known about long-term use of melatonin (the hormone was first identified in 1958). Side effects can be more severe for some people, extending to symptoms include depression and anxiety. And the supplements are especially dangerous for some people. The following are advised to avoid melatonin:

If you decide to take the supplement, be aware that the optimal dosage varies from person to person, as does the proper time to ingest it. Consult your doctor before using melatonin; it's possible that your sleep problems could be aided by something that is better understood.

How Fatal Familial Insomnia Works
Can you die if you don’t sleep?
Why Socks Help You Sleep Better