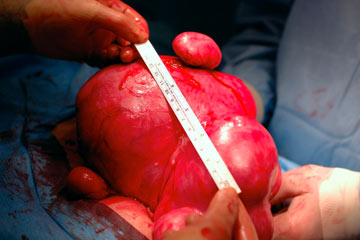 Fibroids, also called uterine leiomyomata, are round (or semi-round), benign tumors that grow in the smooth muscle of a woman's uterus. If it sounds painful, that's because it can be.

Uterine fibroids are one of the most common causes of abnormal uterine bleeding, but the reason why some women develop fibroids is unclear.

Age is a factor. Fibroids tend to affect women over the age of 35, and as many as 20 to 40 percent of women over the age of 35 have or have had uterine fibroids. African American women seem to be at a higher risk of developing fibroids -- as many as 50 percent of black women who have yet to go through menopause are affected. Although it's less frequent for women in their 20s to have fibroids, it's still possible, and it's estimated that about 30 percent of women between the ages of 25 and 45 develop fibroids [sources: Puscheck, USAHRQ].

Family history and, as we just mentioned, ethnicity do appear play a role -- African American women are two to three times more likely to have fibroids, although the reason they are more susceptible remains unclear [source: Stöppler]. Fibroids do seem to be associated with increases in estrogen levels in the body, often rapidly growing during early pregnancy, when estrogen levels are rapidly rising, as well as in women who take oral contraception, and typically shrinking after a woman enters menopause and her estrogen levels decline.

How do you know if you have fibroids? We'll talk about the symptoms of the menstrual disorder, next.

Uterine fibroids are very rarely cancerous (a type of tumor called leiomyosarcoma happens in fewer than one out of every 1,000 fibroids), but that doesn't mean benign tumors can't cause problems [source: USDHHSOWH]. Only between 10 and 20 percent of women have symptoms, but those who do often experience painful periods, sometimes with heavy bleeding (known as menorrhagia) and clots, bleeding between periods, pain during intercourse, a feeling of fullness or pressure in the lower abdomen and lower back pain [source: GUH-DVIR].

While many uterine fibroids are so small they go unnoticed, some fibroids may grow as big as a grapefruit, or bigger -- those that grow into sizable tumors (several inches in diameter, compared to fibroids that never grow bigger than an apple seed) are rare, and may begin to put the squeeze on some internal organs because of the space they take up, sometimes causing pressure and more frequent and more urgent urination, as well as constipation for some women [source: USDHHSOWH].

The location of the fibroid -- or fibroids, as there could be more than one growing at a time -- may also have a negative impact on a woman's fertility. Some studies show that fibroids may increase complications during pregnancy, including increasing the risk of placental abruption (when the placenta prematurely detaches from the uterine wall) as well as increasing the risk of premature labor and delivery. Women with fibroids are also six times more likely to deliver via cesarean section (C-section) than women without [sources: USDHHSOWH, Puscheck].

Fibroids have also been implicated in conception problems such as implantation failure, as well as an increased risk of miscarriage -- in fact one study found women with fibroids may have as much as a 14 percent risk of miscarriage compared to a 7 percent risk in women without fibroids [source: Lee]. Let's talk more about how and why fibroids may affect a woman's fertility, next.

What happens when pregnant women smoke?
Signs and Symptoms of Labor
How to Adjust to a Newborn