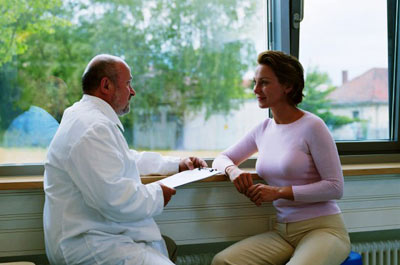 About 15 percent of known pregnancies end in miscarriage, but it is impossible to know how many miscarriages occur during the first month of pregnancy, before many women may even realize they are pregnant. The only indication may be a slightly late menstrual period with a heavier than normal flow.

There are several different types of miscarriages. They include:

It's often not clear why a miscarriage occurs, but in many cases it is believed that a fetus is aborted because it is not developing normally. This is thought to be a chance event and is usually not due to a defect in either parent. Several factors can contribute to abnormal fetal development, including:

Although women often worry that severe emotional trauma or stress or simply falling can cause a miscarriage, this is rarely--if ever--the case. That's true for automobile accidents, too.

On the next page, learn about the symptoms of a miscarriage.

The symptoms of a miscarriage are vaginal bleeding (from a few drops to a heavy flow) and uterine cramps (either dull and constant or sharp and intermittent) in the lower abdomen or back. The bleeding can start suddenly or follow a brownish discharge. A solid clot of material or tissue may pass from the vagina. If possible, this should be saved for the doctor, who may be able to examine it and confirm that a miscarriage has occurred. A miscarriage can either be complete, when the uterus expels all the tissue, or incomplete, when some tissue remains inside the uterus.

A pregnant woman who starts bleeding or experiences abdominal pain should contact the doctor immediately. Depending on the type of miscarriage, diagnosis may be made on the basis of the medical history, physical examination, analysis of any discharge, blood and urine tests (to detect the presence of infection or anemia caused by hemorrhage), or ultrasound studies (to establish the presence or absence of a fetus.)

There is no medical treatment to stop or avert an inevitable miscarriage. The physician generally directs the woman with symptoms to rest in bed and to abstain from sexual intercourse. While it's traditional for doctors to give this advice, many believe that there is little that can be done to stop or avert a miscarriage.

After an inevitable, incomplete, or missed miscarriage, any remaining fetal or placental tissue must be removed by a surgical procedure known as dilatation and curettage, or D&C), in which the physician expands the cervix and gently scrapes out residual material from inside the uterus. Without this precaution, a woman is more susceptible to infections and heavy bleeding.

It is normal for a woman to feel depressed by the loss of an expected child, but it is usually safe for her to attempt to conceive six to eight weeks later, on the advice on her physician.

Eighty percent of women who miscarry once have a successful subsequent pregnancy. Although it is uncommon, some women have three or more miscarriages in a row; they are called habitual aborters. When this occurs, the physician will thoroughly evaluate both the woman and her partner to determine the cause, if any. Frequently, a chromosome abnormality in one parent or an abnormality of the uterus is found. If an abnormality of the uterus is the cause, surgery can correct the problem and a successful pregnancy often follows. If the cause of miscarriage is a chromosome abnormality in either parent, the problem cannot be corrected.

Are antibiotics safe to take during pregnancy?
Can you get a tattoo if you're pregnant?
Guide to Being One Week Pregnant