Pregnant With Your Twin 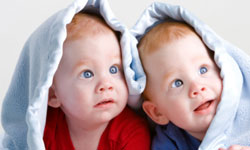 Not all twins end up like this cute pair.
iStockphoto/Thinstock

OK, so this isn't technically pregnant, but it's a pregnancy complication that is rare but documented in twin gestations: Pregnant with your own twin. Fetus in fetu (literally, baby within baby) is like a host and parasite setup. A set of identical twins is conceived but in the very early stages of the first trimester, something goes wrong with the separation. Sometimes that results in conjoined twins, and in rare instances, it can result in one fetus being absorbed through the umbilical cord and undeveloped abdomen of the other. The absorbed twin does not undergo much development before absorption; generally, it's a mass of cells and maybe body parts. It becomes like a tumor to the surviving twin, a parasite that feeds on the blood supply of the host. Most fetus in fetu cases are discovered when an abdominal mass or tumor is suspected, usually when the surviving twin is still a baby or toddler.