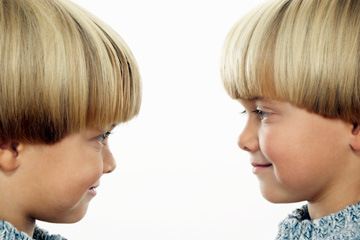 Has your life ever felt incomplete? Not in a way that you could put your finger on, the way some people might bemoan the lack of a spouse or a sports car. Rather, something has always felt missing. Have you made up a secret, indecipherable language yet never had someone to speak it with? If so, you might have had a vanishing twin.

Though it sounds like a Stephen King title, vanishing twins are actually quite common. Researchers estimate that 1 in 8 pregnancies involve twin fetuses, yet only 1 in 80 pregnancies actually ends in the birth of twins [source: Goldman]. What happens to all those unborn twins? They die very early in the pregnancy and are simply reabsorbed by the mother's body. Spotting in the first trimester can be an indication of this occurrence.

A study published in 2007 found that surviving twins, the ones that go on to a solo role in the birth show, are unaffected developmentally by the other twin's disappearance, though Internet searches reveal numerous support groups for those who feel they are missing their other half [source: Anand et al.]. In 2005, American cyclist Tyler Hamilton was accused of blood doping, a process in which athletes boost performance by using another person's blood; as his defense, Hamilton claimed that the other blood cells must have been left by his vanishing twin [source: Kolata]. Hamilton was suspended from the sport anyways.

Hamilton's case could be a humorous example of sibling rivalry gone too far; after all, though Jan Brady felt she lived in her sister Marcia's shadow, she never pinned her troubles on a vanishing twin. But Jan Brady -- and even Peter Brady -- may be concerned to learn some of those twins don't disappear entirely. Rather, they become absorbed inside their womb mate. With the rate of vanishing twins so common, you have to wonder: Am I carrying my own twin? 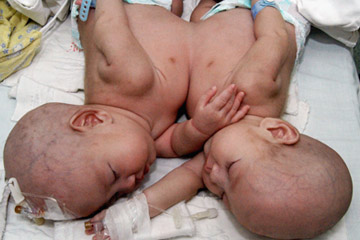 Fetus in fetu is a rare condition in which a fetus becomes enveloped by its twin in the womb. While fraternal twins result from two separately fertilized eggs, identical twins are the product of a single fertilized egg that separates. The separation of that fertilized egg doesn't always go smoothly; conjoined twins are one example of an imperfect separation. Fetus in fetu, which occurs very early within a pregnancy, results when instead of separating, one fetus becomes trapped inside the other one. The trapped fetus begins acting like a parasite on its host, tapping into the twin's blood supply to stay alive. If the fetus grows, it can cause great pain for its carrier.

Most cases of fetus in fetu are caught when the host twin is an infant, though there have been cases of people in their 30s and 40s carrying their own twin. One notable case occurred in India: A 36-year-old man looked visibly pregnant, but when doctors operated on what they thought was a tumor, they found a malformed fetus with limbs, genitalia and hair [source: ABC News]. This man's example is a rare scenario, though, as about 90 percent of cases are found before an infant is 18 months old [source: Hoeffel et al.]. The babies usually have an abdominal mass, though sometimes the lump can be found other places, such as the brain or the scrotum.

For those of you eyeing your full-length mirror, bear in mind that this condition is extremely rare, with fewer than 100 examples documented in medical literature [source: Newsome]. Doctors estimate that it happens at 1 in every 500,000 births [source: Goldman]. The scenario does happen in equal rates to males and females, and though it usually involves only one fetus, sometimes multiple fetuses are absorbed. When they are removed, the fetuses are about 1.5 to 9.5 inches (4 to 24.5 centimeters) in length and weigh between 0.04 ounces (1.2 grams) and 4 pounds (1.8 kilograms) [source: Hoeffel et al.]. While various body parts may be present, the fetus is always anencephalic, meaning that it's missing major parts of its brain and skull. Once the mass is removed, the host twins are usually completely fine.

It's worth noting that some researchers believe that what may appear to be a case of fetus in fetu might actually be a teratoma. A teratoma is kind of tumor that can also look like a malformed fetus, yet it's just a group of cells that can develop skin and teeth. Sometimes there may not be enough evidence to tell which has occurred, though an instance of teratoma is more common than that of fetus in fetu. Currently, if the fetus has some evidence of a vertebral column, the case is considered to be fetus in fetu.

Can acupuncture and hypnosis treat infertility?
Is conceiving after a miscarriage difficult?
Can you test your fertility at home?