Is it possible for a pregnant woman to be allergic to the placenta? 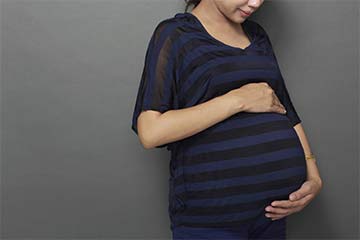 A small percentage of women actually get a bad rash from their baby's placenta.
ferlistockphoto/iStock/Thinkstock

Although many of us are well-educated about the various risks and rewards of pregnancy, few have any idea that the placenta, grown within a mother's own womb, can actually turn on a dime and cause allergic reaction via a rare, painful autoimmune disease.

This disease, known in scientific circles as pemphigoid gestationis (PG), is characterized by painful, itchy, large blisters or welts on various body parts. In most cases, the rash begins in the abdominal area, progressing to the limbs and buttocks over time. Large, angry blisters typically appear after the patient experiences several weeks' worth of lesions and papules (swelling that resembles a pimple) [source: Huilaja et al.]. Fortunately, the genitals, face, mouth and scalp are usually spared the rash in all its blister-y glory [source: EADV]. Thank heaven for small favors, right?

But before you swear off pregnancy altogether, bear in mind that just a tiny percentage of pregnant women get PG. Internationally, the disease is estimated to affect one in every 2 million pregnancies, with a higher incidence in the U.S. of about one in 50,000 to 60, 000 pregnancies. Obviously, it affects only women of childbearing age, although Caucasian women are more likely to be diagnosed with it than African-Americans. Originally known as herpes gestationis (the name was changed because it turned out to have zero relation to the herpes virus), modern medicine still isn't sure why PG happens, but placental involvement is a popular theory. The prevailing idea is that normally harmless placental tissue enters the mother's bloodstream, only to be attacked by a confused immune system, as is the case with other types of autoimmune diseases. Female hormones, particularly estrogen, may aggravate the reaction, which could explain why the disease occurs during later pregnancy as estrogen levels rise [sources: Freiman, EADV]. The offensive measures taken by the immune system in error can subsequently wreak havoc on the body, in this case resulting in the allergic reaction rash. Not cool, immune system. Not cool.

Skin irritations can pop up with zero warning, but most of the time are pretty minor in terms of discomfort and are easy enough to treat. PG, however, has been described as causing a severe burning and itching. Zuleika Closs, who experienced PG firsthand told a British daily, "At first, it felt like something was crawling on my skin but then it became unbearable." The physical appearance, as well as the significant discomfort PG causes, can definitely get in the way of day-to-day life, impacting work, as well as family and social interactions [source: Freiman].

The nature of the disease, coupled with its relative rarity, often confuses physicians who've never seen it before, leading to incorrect or delayed diagnoses and treatment. Doctors even told Closs that she had a rampant, contagious case of scabies, which she feared would be passed on to other people, including her baby [source: The Sun]. For the record, PG is not contagious, no matter how severe it looks. Generally, welts appear first, and diagnosis is made easier once the large, raised, fluid-filled blisters appear a couple of weeks later [source: AARDA]. Immunofluorescence, a technique that uses fluorescent dye to locate offending antibodies, helps to determine the level of severity. A dermatologist or an obstetrician typically makes the diagnosis [source: Huilaja et al.].

The disease is a dermatologic condition that usually rears its ugly head during the second or third trimesters (between 13 and 40 weeks), but sometimes appears earlier in pregnancy. Unfortunately, the end date is nearly as nebulous as the onset. Often, symptoms dissipate near the end of pregnancy, but can come roaring back near or during delivery. Even once the child is born, women have been known to experience flare-ups during their menstrual cycles, sometimes years after the fact [source: Freiman]. The use of oral contraceptives can also cause resurgence [source: EADV]. Think of it as the prenatal gift that keeps on giving, except that instead of something awesome like a new smartphone, it's a pair of itchy argyle socks.

Purpose of the Placenta

Bizarre reactions aside, the placenta is a critically important component of pregnancy. The organ, which is delivered after the baby (hence, the term "afterbirth,") is responsible for feeding the tiny tyke while in utero. Plus it functions as baby's lungs before birth, filters waste products and prevents infection [source: Bisits].

Many pregnant women avoid medications at all costs to avoid potential risks to the fetus. The significant pain and discomfort associated with pemphigoid gestationis, however, typically requires some sort of soothing action, keeping the safety of mother and child in mind. Unfortunately, like many other rare diseases, PG treatment has not been studied extensively, and often mirrors the treatment of other dermatologic conditions.

As with many of those, the first line of defense is usually topical (cream) corticosteroids. In mild to moderate cases, this is often enough to placate the PG monster, make it tolerable and keep it from getting worse. Stronger versions are available if the less potent options aren't doing the trick. Oral antihistamines are also often employed to help with the itching. Very severe cases may warrant oral corticosteroid treatment like prednisolone/prednisone, which has a pretty decent safety rating [source: Huilaja et al.]. Less aggressive methods include tepid baths, moisturizers and compresses to relieve itching [source: Freiman].

Although the risk of miscarriage is about the same as normal pregnancies, women dealing with PG are somewhat more likely to experience preterm births, and the babies might be smaller than average. This could be because of "mild placental failure" due to antibodies associated with the disease, or even a reaction to higher-dose steroids used to treat the disease [sources: Huilaja et. al., EADV]. It is possible, but relatively rare (5 to 10 percent of pregnancies), for the baby to wind up with a rash after delivery. Fortunately, the rash usually goes away once the antibodies are eradicated, six weeks or so after birth [source: EADV].

From the mother's perspective, most cases of PG clear up a month or two after delivery, if not sooner, usually with little to no scarring [source: Freiman]. But unfortunately, once she's had the disease she's likely to develop it again in later pregnancies, at a rate of about 90 percent. To add insult to injury, it is more severe and occurs earlier the second time around [source: Lardenoije]. And there is a higher, albeit small, risk of her developing other autoimmune conditions, like Graves' disease. This potential exists for the rest of her life [source: Moore].

Author's Note: Is it possible for a pregnant woman to be allergic to the placenta?

To think, I thought the heartburn, sciatic pain and weight gain I experienced during pregnancy was trying. Seems like a walk in the park compared with what ladies dealing with pemphigoid gestationis go through!