by Editors of Consumer Guide
START COUNTDOWNNEXT
Start the Countdown 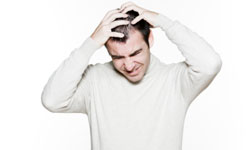 Get great ideas for home remedies for itching -- everything from topical treatments to herbal teas.
Hemera/Thinkstock

To scratch or not to scratch, that is the question. When confronted with an itch, most of us tend to throw self-discipline out the door and scratch to our skin's content. While that may prove momentarily satisfying, scratching excessively can injure your skin. And if you break the skin, you leave yourself open to infection.

Itching, medically known as pruritus, is caused by stimuli bugging some part of our skin. There are a lot of places to bother on the body, too. The average adult has 20 square feet (2 square meters) of skin, all open to the world of irritants. When something bothers our skin, an itch is a built-in defense mechanism that alerts the body that someone is knocking. We respond to an itch with a scratch, as most people want to remove the problem. But the scratching can also set you up for the "itch-scratch" cycle, where one leads to the other endlessly.

An itch can range from a mild nuisance to a disrupting, damaging, and sleep-depriving fiasco. Itches happen for many reasons, including allergic reactions; sunburns; insect bites; poison ivy; reactions to chemicals, soaps, and detergents; medication; dry weather; skin infections; and even aging. More serious itches, such as those caused by psoriasis or other diseases, are not covered here.

Scratching isn't the only solution to an itch. The kitchen cupboards hold a few more. See the next page to learn about easy remedies.