Why does pregnancy cause you to fart more? 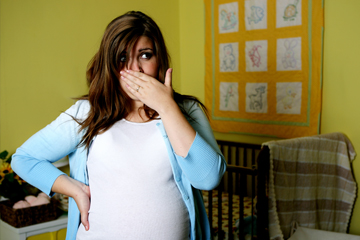 It feels as though the pregnancy stars have aligned. You're smack-dab in the middle of your second trimester, flush with energy and ecstatic the morning sickness has released its daily hold. Your appetite has bounced back and so has your tolerance for relatives and strangers alike. When your in-laws suggest dinner at your favorite restaurant, you can't say "yes" fast enough.

After scanning the menu and ordering a four-course meal, you settle in for a night of feasting. But just as you reach for your water glass, the cloth napkin so carefully placed on your vanishing lap slides onto the floor. You lean over to retrieve it and -- poof! -- release a sound so unexpected that it vanquishes every other noise in the room. In the confused aftermath that follows, diners crane their necks for a better look and barely suppress their nervous giggles. Your in-laws look mortified and your significant other launches into a volley of small talk designed to draw attention away from your recently released, rather impressive fart.

Farts happen. And during pregnancy, they seem to happen more often. What's behind the increase in flatulence? From the moment a woman becomes pregnant, her body begins orchestrating a behind-the-scenes construction zone -- one in which pregnancy hormones act as site supervisors. An increase in progesterone signals to the digestive system. "Slow down," it says. "Stop digesting so quickly."

This causes a pregnant woman to be plagued by sluggish absorption, as much as 30 percent slower than normal. This causes greater amounts of gas to be produced, and all that gas has to go somewhere, usually in the form of a burp or a fart [source: American Pregnancy Association].

Then, as the uterus becomes larger throughout pregnancy, it vies for space in the abdominal cavity. It pushes on the intestines, the stomach, the bladder and everything else within reach. Digestion slows down and, for many women, the urge to pass gas increases. At the same time, the increase in progesterone causes muscles to relax in preparation for childbirth. So squeezing those cheeks in an effort to keep all that gas in? It's often an effort in futility [source: Murry].

There are a few things that can help, though. Watch out for foods that trigger flatulence production. These foods can vary from person to person -- and even pregnancy to pregnancy. For example, broccoli or beans may be culprits for some women, but not for others. If you feel particularly gassy after a meal, make a mental note of the foods you ate. One or more of them could just be the cause.

Be sure to drink plenty of water, as it aids digestion and helps prevent constipation. Eating small meals and chewing each bite thoroughly may help, too. Regular and moderate exercise can also kick your digestion into gear, helping foods pass without unnecessary gas [source: American Pregnancy Association].

What Is the Linea Nigra of Pregnancy?
Do all-natural fertility drugs really work?
What are the effects of cancer on fertility?