Can I feel pregnant when my wife is? 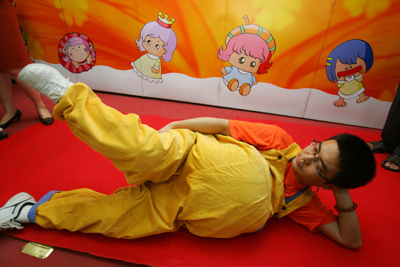 Pregnancy Image Gallery While some men, like this one in Beijing, China, have gone to lengths to understand what their wives go through during pregnancy, others have no choice in the matter.  See more pregnancy pictures.
China Photos/Getty Images

Men are usually somewhat peripheral during pregnancy. After all, women are the ones who carry the child and endure the process of labor and childbirth. Most men will take advantage of any opportunity to help, and getting up in the middle of the night to head to a drive-thru for french fries and a chocolate shake is often their greatest expression of sympathy for their wives' condition. But for some men, doting is just the beginning.

Imagine your stomach bloating as your wife's grows, or the two of you ill at the same time with morning sickness. Up until recently, the medical establishment has ignored reports of fathers-to-be suffering everything from strange food cravings to backaches and weight gain. But a study in the summer of 2007 went a long way to proving the existence of Couvade syndrome -- or sympathetic pregnancy.

The study conducted at St. George's Hospital, a part of St. George's University in London, England, examined 282 men ages 19 to 55 whose wives were pregnant. A group of 281 men whose wives were not pregnant was used as a control in the study. Researchers found that the majority of the men with pregnant wives displayed a variety of pregnancy-associated symptoms like mood swings and morning sickness.

Stomach cramps were the most commonly reported; one man reported his own labor pains that rivaled his wife's while she was delivering their baby. A few of the men who showed signs of sympathetic pregnancy developed pseudocyesis -- a phantom swollen stomach.

The study found that the symptoms generally followed a similar pattern to the men's wives' pregnancies. The symptoms came on during the early stages of the pregnancy, reached their worst point within the third trimester and cleared up after the wives had given birth. Even more strangely, 11 of the men who sought medical help for their symptoms found that doctors could offer no physical explanation.

Cases of Couvade syndrome (which comes from the French "couver," meaning "to hatch") have been widely documented in different parts of the world. One 1994 study showed that some Thai men also exhibited symptoms of sympathetic pregnancy. Another study, conducted in Italy the following year, says that reports of the incidence of sympathetic pregnancy ranges from 11 to 65 percent [source: Klein]. What's more, a person needn't be a man with a pregnant wife ­to experience Couvade syndrome. In at least one case documented in the United States, a woman began to show sympathetic symptoms similar to her pregnant twin sister who lived in another city [source: Budur, et al].

But why does it happen? Researchers aren't sure. There are, however, a wide variety of suggestions. It may be a man's anxiety over the impending birth of his child that could cause him to show signs of sympathetic pregnancy. Another theory is that Couvade syndrome may be a man's "statement of paternity" or even a sign of envy toward his wife or feelings of rivalry with the baby [source: Klein].

All of these concepts suggest that Couvade syndrome may be a psychosomatic condition -- a response by the body to a stimulus in the mind. Find out about the mysterious link between mind and body on the next page. 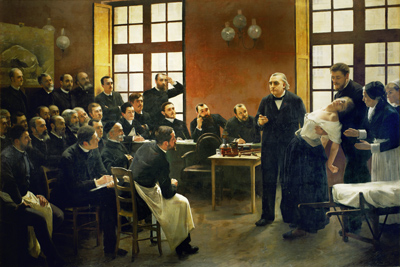 Advances in the understanding of psychosomatic illness began with research into hysteria by physicians like Jean Martin Charcot, depicted here teaching a lesson on the condition.
Imagno/Getty Images

Couvade syndrome is currently not a recognized medical condition, although the St. George's University study gave credibility to its existence. It seems logical that the syndrome can be explained as a reaction by the body to an emotional state in the mind. The next step is to find this link between mind and body, but so far, this link has proven rather elusive.

It wasn't until the 18th century that the investigation into the mind's effects on physical illness began in earnest. European physicians looking into female hysteria (which had previously been thought to originate in the uterus), came to believe that it was a medical condition that could be explained as a reaction to a highly charged emotional state. Since then, the intensity of the investigation into psychosomatic conditions has waxed and waned, although it has never been abandoned.

Psychosomatic conditions may manifest in different ways. For example, it may be looked upon as strictly a mental disorder, as in the case of a patient with Munchausen syndrome, in which a person is convinced that he or she is sick in order to gain attention. While the symptoms are strictly in the patient's mind, they may feel quite real to him or her. It can also manifest as the result of fear or anxiety, as in conversion disorder, a mental condition in which emotional distress manifests itself physically, as in a dancer who is afraid to go on stage developing paralysis [source: Mayo Clinic].

But there is also another way of looking at psychosomatic conditions that don't infer a type of mental illness. It is becoming widely accepted in medicine that the mind has a large influence on the health of an individual.

In this sense, psychosomatic conditions can be as simple as stress causing a headache or as complex as an introverted personality contributing to the development of cancer. Voluminous studies have shown a correlation between illness and emotion. One study found that people diagnosed with panic disorder display a higher likelihood for abnormal electrical activity in their heart function. Others have shown that people who suffer from depression following major surgery are more likely to die than those with a positive attitude following the same types of surgery.

But as the research on the correlation between emotional states and physical illness accumulates, the actual links are still being investigated. Like Couvade syndrome, it's evident: The mind affects the body. But science has never been a discipline to be satisfied with mere correlation.

Endocrinology may be the best contender in providing the link between body and mind. Scientists have known for a long time that hormones play a role in both mood and physiology. For example, emotional distress has been shown to have a correlation to the release of the hormone 17-OHCS by the adrenal gland. The possible connection here may be that emotional stress, like anxiety, acts on the central nervous system -- which can influence the functioning of the endocrine system.

As science delves more deeply into the influence of emotion over physiology, the connection between mind and body is becoming increasingly apparent. This connection seems to go both ways: Like the effect emotion can have on glands, other studies have found that electrolytes -- elements such as potassium that create the electrical impulses need for body function -- are correlated to mental illnesses, like depression. Perhaps eventually research like this will yield an explanation for sympathetic pregnancy.

For more information on pregnancy and the mind, visit the next page.

Will certain sexual positions help raise my likelihood of conception?
How do smoking and drinking affect conception?
What role does hCG play in pregnancy and fertility?