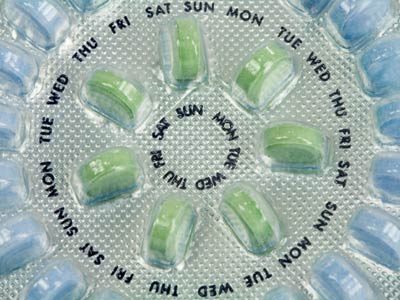 When the pill was being developed in the late 1950s, the inventors knew that they could control the length of a woman's menstrual cycle. A woman could have a period every 25 days, 45 days or even 90 days. A dosage of 21 active pills followed by seven placebo pills was chosen because it would mimic a woman's natural cycle. The inventors figured that maintaining a traditional 28-day cycle would help women adjust to the idea of taking birth control pills, and that monthly bleeding would also provide reassurance that the method hadn't failed. That was particularly important in a time when home pregnancy tests weren't the convenient option they are today. Inventor John Rock, a devout Catholic, also thought he could win approval for birth control from the Catholic Church by mimicking a woman's cycle as closely as possible.

­Rock's gamble failed, but over time, women did pick up on what Rock and his fellow inventors knew: that by skipping the week of placebo pills in their birth control pack, they could skip a period. Some women may have done this occasionally, in anticipation of a vacation or a hot date, while some women may have adopted the practice to avoid particularly painful menstrual periods.

If a woman doesn't need to bleed every 21 days, then making the jump to every 84 days, as regulated by Seasonale, isn't so weird, right? While many doctors and the FDA support extended-cycle menstruation, not everyone is convinced that menstrual suppression is a good idea. Dr. Susan Rako, who wrote a book on the risks of menstrual suppression, called it "the largest uncontrolled experiment in the history of medical science" [sources: Kelley, George, Fried].

Rako and other doctors opposed to menstrual suppression worry about a woman's hormonal levels. Oral contraceptives cause a drop in testosterone, which can affect libido, bone strength and heart health. And while less-frequent menstruation may prevent ovarian cancer, long-term use of estrogen has been linked with breast cancer [source: Fried].

So while research has shown that about two-thirds of women would get rid of their period if they could do so safely, tampon makers may not need to cower in fear yet [source: Saul]. There are some women who will always want the monthly assurance that they're not pregnant. And, as we mentioned in the introduction, there are people who think that playing God with a woman's natural hormonal balance is tinkering with the very meaning of what it is to be a woman.

For more on topics related to women's health, see the links below.