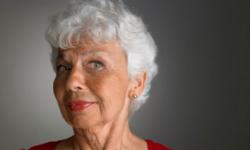 People are living longer as a result of advancements in medicine. See more getting beautiful skin pictures.
Christopher Robbins/Getty Images

As medical science has advanced, so has life expectancy in the developed nations that benefit from those advancements. In the United States alone, the average life expectancy for all races and sexes has jumped from 70.9 years in 1970 to 77. 9 years in 2005 [source: CDC].

The advancement of medical science has also led to interest in living longer and healthier lives. As a result of this vigorous interest, a booming cottage industry dedicated to longevity has emerged over the past couple of decades. It seems like as soon as a published study suggests an enzyme, hormone or diet that could lead to a reduction in the ravages of age, companies rush a slew of new products centered on those findings onto the market.

Some of these products work; others are simply based on inconclusive, yet promising findings. There are, however, some tried and true (and scientifically supported) techniques to stave off both the appearance and the symptoms of aging. What follows are five easy methods you can try to stay young and healthy longer. 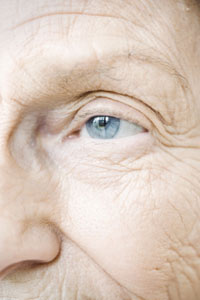 The appearance of wrinkles is hastened by smoking, both through the biochemical damage it does to cells and the repetitive facial expressions it requires.
Paul Burns/Getty Images

One of the best things you can do for your skin may also be the hardest -- quitting smoking. If you've never held a cigarette to your face or quit years ago, good for you! You can head to the next page. If you smoke even half a pack a day, though, here are some reasons you should quit, as far as skin care goes.

Smoking has serious effects on the appearance of the skin in a number of ways. The smoke itself comes in contact with the skin, causing biochemical changes to skin cells. It damages the collagen and elastin found in the dermal layers, which provide pliability and elasticity to skin tissue. This leads to an acceleration of sagging and wrinkling of the skin. Cigarette smoke also constricts the blood vessels that deliver oxygen and nutrients to skin cells, which slows cellular production and growth.

As if that weren't enough, even the act of smoking may have an effect on skin's appearance. The pursed lips and squinted eyes, the inherent expressions of a smoker, may over time lead to wrinkled and saggy skin [source: Gibson].

The effects begin to appear quickly. A 2002 study found that smokers as young as 20 years old can display wrinkles under a microscope [source: AAD].

Put Good Food in Your Belly 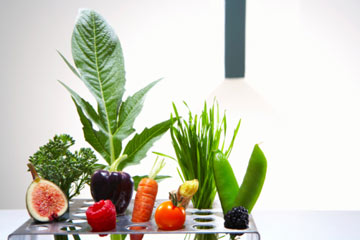 Colorful fruits and vegetables are an easy way to pack antioxidants into your diet.
Thomas Northcut/Getty Images

You are what you eat, the saying goes. This piece of wisdom underscores the body's process of extracting nutrients from food; we get what we put in our bodies, whether it's good or bad.

Some foods may actually combat the aging process because of the nutrients they contain. Under the free radical theory of aging, our bodies wear down as the result of cellular destruction by free radicals. These are molecules or atoms with an unattached electron, produced by normal body processes where oxygen is used, which seek to attach itself to another atom. These radicals can attach to a number of different molecules and atoms; if they attach to a cell's mitochondrial DNA (mtDNA), damage can occur and the cell may eventually die.

Here's where food comes in. Foods containing antioxidants have been shown to neutralize free radicals by stabilizing them. The theory goes that the more antioxidants (like vitamins C and E and beta carotene) are consumed through food, the less chance free radicals have to damage cellular structures, including skin cells.

Studies of the effectiveness of adding antioxidants to stabilize free radicals have come to different conclusions; definitively speaking, the jury's still out. Still, physicians recommend eating a diet rich in antioxidants, such as colorful vegetables and cold-water fish like trout and salmon. 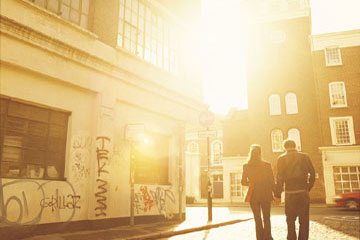 We need exposure to ultraviolet (UV) radiation from the sun. Ultraviolet radiation stimulates production of vitamin A, which, in turn, is used in the production of melatonin, a key neurotransmitter. Without proper melatonin levels, humans may fall into a depressed state.

Too much UV radiation can accelerate the appearance of wrinkles and other signs of aging by destroying collagen and elastin. The sun's damaging effects on the skin is a specific form of external aging called photoaging. In addition to destroying the collagen found in skin tissue, over time UV radiation lowers the body's ability to produce new collagen to replace what was lost to radiation.

There are some sensible ways to ward off sun damage. Dermatologists recommend regularly using a sun block with a sun protection factor (SPF) of 15 or higher when going out in the sun [source: AAD]. Additionally, covering skin with clothing offers substantial protection from UV rays.

Some foods also offer protection from sun damage. In one study, an ointment of 50 milligrams of green tea extract was applied three times weekly to the skin of rats. As a result, skin cancer rates declined 67 percent over 28 weeks of UV radiation exposure [source: Watson]. 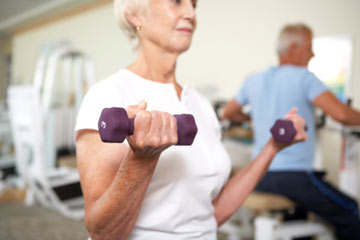 Good news about senile sarcopenia: its progression can not only be stopped, it can be reversed through weight training.
Rob Melnychuk/Getty Images

Perhaps one of the most obvious signs of aging is the stooped posture and trembling limbs of the elderly. These signs of aging can often be categorized as senile sarcopenia. It's the result of a loss of muscle mass, which results from the death of motor neurons that control muscle fibers. When a mass of muscle fibers lose the neuron that controls them, they are left inactive, wither and die. In some cases, other neurons will bind themselves to abandoned muscle fibers. The result is an overloaded neuron that controls muscles with lessened precision. Sarcopenia accounts for sagging skin and wrinkles; as we lose muscle fibers beneath our facial skin, the tissue droops.

Luckily, studies have shown that sarcopenia can not only be decreased, its effects can even be reversed through resistance weight training. A 2004 Rutgers University study found that 45 minutes of resistance training three times a week for 12 weeks increased muscle fiber by an average of 32 percent and strength by an average of 30 percent [source: Bliss].

Chill Out: Reduce Your Stress 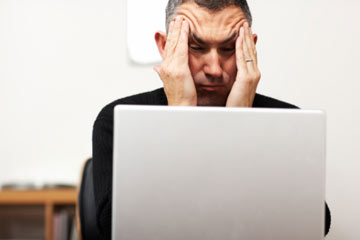 Here's a good reason to reduce your stress: It kills off your cells prematurely.
James Braund/Getty Images

Back in 2004, researchers managed to uncover a definitive link between the mind and the body. Unfortunately, it wasn't very good news: Geneticists found that chronic stress shortens the lifespan of cells in the body by affecting telomeres, the ends of chromosomes that allow DNA to successfully replicate itself and form new cells. When these telomeres wear down (as they do naturally over time; the process accelerates when the mind experiences stress), the DNA in the nucleus of a cell can no longer divide. As a result, cells, then tissue, then organs, begin to die [source: UT Southwestern].

Since stress can lead to a premature shortening of the telomeres found at the ends of chromosomes, reducing the stress in your life is an internal anti-aging technique. Reducing stress also leads to better sleep, which, in turn, reduces the appearance of age, like wrinkles and the bags under the eyes.

There are a number of stress reducers in your life that don't require any pills or medical intervention; what could be more natural than exercise? Most physicians recommend taking up an exercise regimen as a fundamental method of reducing stress. Exercise can boost self-confidence, release pleasure-inducing chemicals in the brain and bestow a sense of well-being, all of which combat stress. Practicing positive visualization, learning time management, spending time with friends and family and even improving communication can all lead to decreased stress. 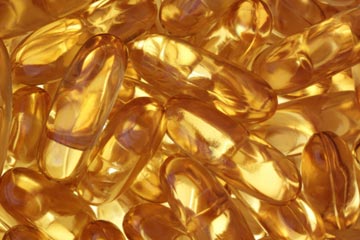 Are anti-aging supplements the new fountain of youth? See if coenzyme q10, human growth hormone and other supplements really work.