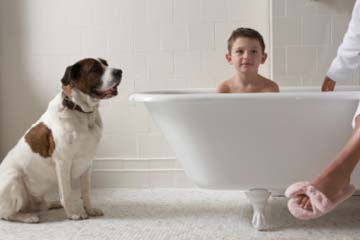 Skin Problems Image Gallery Kids often get eczema -- can half a cupful of bleach in the bathwater clear it up? See more pictures of skin problems.
Chris Amaral/Digital Vision//Getty Images

Everyone's felt the acute itch that comes with a mosquito bite. The impulse to scratch it is almost compulsive, and it can take a great deal of restraint to fight the desire. Now imagine that instead of a couple of angry mosquito bites, huge patches of skin all over your body became dry, itchy and inflamed. The need to scratch overwhelms you, so you give into the urge.

But soon you find out the scratching doesn't help -- in fact, it makes the situation desperately worse. The afflicted skin becomes even more cracked and scaly, and develops crusty, weeping sores. The sores become infected and the rash intensifies, continuing a vicious cycle from which there is seemingly no escape.

Now imagine all that happening to a 2-year-old.

This is the reality of eczema. It's most common among infants and children, although adults can also suffer from the condition. Eczema can take several forms, the most frequent being atopic dermatitis. Atopic dermatitis is a severe, chronic disease that causes the horribly itchy, inflamed skin that typically acts as described above. Infection follows frequently and contributes to flare-ups, which generally come and go unexpectedly. Various other complications can also ensue.

The exact cause of eczema is unknown -- although there's believed to be a genetic link -- but a number of external factors are believed to be at work during an eczema episode. Potential triggers vary from person to person, but can include:

And that's an abbreviated list. Eczema is not contagious, but as if it weren't enough -- people with the disease also commonly suffer from hay fever and asthma. So what hope is there? It's true there's no cure for the condition, but there are a number of possible treatments for those enduring eczema. Let's explore one interesting method on the next page.

Bleach to the Rescue

All sorts of tips and treatments are available to help reduce the likelihood of a severe atopic dermatitis episode, and to ease one when it occurs. Some are as simple as taking the time to moisturize, while others include antibiotics and other prescription medications.

There are problems with some of the more intense treatments, though. For example, people with eczema often have Staphylococcus aureus (staph) on their skin -- as many as about 90 percent, versus about 25 percent of the rest of the population [source: Boyles].

Not only is staph considered a possible trigger for an outbreak, with the number of open wounds that often develop during an episode, an active infection becomes more likely and can worsen the situation. Even without an active infection, however, it's been suggested that staph on the skin adds fuel to the fire. And when you figure that people with eczema are also suspected of having malfunctioning immune systems, you have a Molotov cocktail of trouble waiting to happen.

Antibiotics can only help fight infections for so long, however, before bacteria tend to develop a resistance to them. This case is especially well illustrated by methicillin-resistant S. aureus, more commonly known as MRSA, which is exceptionally hard to battle.

But one interesting treatment circumvents this issue -- bleach baths. Diluting bleach into a bath of warm water kills the bacteria and lessens the chance of new super germs emerging. People should definitely consult their doctors (especially in cases with children) for advice and instructions before starting a bleach bath regimen, but a general recommendation is to use half a cup of bleach in a full, standard size bathtub, bathing twice a week and possibly more often during an episode.

When properly mixed, the odor of bleach shouldn't be detectable and bleach baths work best in combination with other treatments. Lukewarm water is ideal and it's very important to gently pat the skin dry after bathing and immediately apply generous amounts of moisturizer.

With a little luck and a jug of Clorox, hopefully eczema symptoms will recede speedily.

Sometimes baths can be painful to extremely dry skin, so in cases of really bad episodes, bleach baths may need to be delayed until the symptoms relent somewhat. Test the dilute solution on a small patch of skin before jumping in -- bleach is a powerful chemical, after all -- to make sure it isn't irritating. Also, bleach should not be applied directly to the skin, and it should never ever be mixed with ammonia or vinegar because the resulting fumes are highly toxic.

Facelifts: What You Need to Know
How much is too much when it comes to makeup?
How much does laser hair removal cost?