The Science of Nightingale Poop 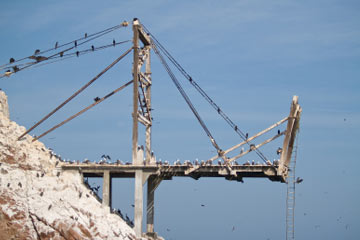 Want to collect some guano? This is what you do it with in Peru.
©iStockphoto.com/jarnogz

What we think of as bird poop is also called guano (when it's considered useful, that is). It differs from other types of animal poop because birds just have one opening, called the cloaca, through which they excrete both their liquid and solid wastes. Rather than "poop," guano is technically all of the bird's waste material in one substance. In places where specific types of birds, such as gulls, gather in larger numbers, their dried guano is collected and used as fertilizer. This natural fertilizer is making a comeback due to organic farming, after decades of artificial fertilizer use.

Most bird poop is white because of the uric acid, which isn't soluble in water, but different birds have different poop compositions. Nightingale poop contains large concentrations of nitrogen-rich urea (which is also found in urine) and guanine, an amino acid. In addition to being used in fertilizer, urea is used in cosmetic applications because it helps the skin hold in moisture, although typically synthetic urea is used today. Guanine is used in a lot of different applications because it creates a shimmery, iridescent effect in cosmetics, paints, plastics, imitation pearls and other products. It can also be extracted from other natural sources such as fish scales. These ingredients are what make bird poop facial recipients report softer, lighter, brighter skin.

Given the fact that there are probably other ways to get these ingredients on your skin, is it really necessary to get a bird poop facial to achieve the same result? While users swear by their results, there's no proof one way or the other. In the next section, we'll find out how poop becomes a facial ingredient.