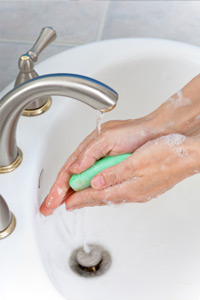 For a long time, when it came to personal cleanliness, there was only one frontline fighter: bar soap. Of course, bar soap came in many guises -- square bars and rounded bars, scented and unscented, clear and opaque -- but its essential look and function went unchanged for hundreds of years. Then other cleansers -- both soap and non-soap formulas -- began to appear. Bar cleansers were joined by liquid products, which were first used primarily for hand washing. The market eventually became flooded with shower gels, also known as body washes, which quickly became a popular alternative to bar soap.

If you've spent any time in the skin care aisle at your local store, you know that figuring out which products to buy, soap and non-soap cleansers included, can be a very time-consuming task. So which is better -- bar soap or liquid soap? You might be relieved to know that at a very basic level there is no real difference between the two. All types of true soap are composed of the same essential components -- alkali salts of fatty acids and detergent properties [source: U.S. Food and Drug Administration]. The detergent in soap, which is called a surfactant, allows oil and dirt to mix with and be washed away by water [source: Cosmetics Info].

Like so many health and beauty products, there are advantages and disadvantages to both bar soap and liquid soap. One of the main complaints about bar soap is that it washes away more than just dirt. Harsh bar soaps can deplete your skin of the moisture it needs to stay healthy. Liquid soaps, on the other hand, often contain moisturizers, but they're also more likely to have fragrances and other additives that can make sensitive skin crawl [source: Bruno].

If you're thrifty, you may find that bar soap is friendlier to your pocketbook than liquid soap [source: Bartels]. However, if you're not too fond of the slimy mess bar soap can leave in your soap dish, you might think liquid soap is worth the extra cost.

Over the last few years, a debate has flared up over which is better: stalwart bar soap or showy shower gel. Before you choose sides, keep reading to learn more about the main contenders.

Pros and Cons of Bar Soap

Bar soap has been around longer than liquid, but it often gets the short end of the stick when compared with its supposedly more glamorous cousin.

One claim against bar soaps is the bacteria factor. Because people sometimes share the same bar of soap, fears concerning the transfer of bacteria have emerged. However, studies have shown that although bacteria levels on previously-used bar soaps are slightly higher than on unused soaps, there have been no detectable levels of bacteria left on the skin's surface after using the soap [source: Heinze]. Bar soap users who are still worried about spreading germs can always make sure that each person has his or her own soap.

Another con of bar soaps is the fact that many have a higher pH level than liquid soaps. Because of this, some bar soaps can be more drying to the skin. Dried-out skin is not only uncomfortable but also heals more slowly when injured. What most liquid soap enthusiasts fail to take into account is that there are many different soaps on the market that have low or neutral pH levels, which are less drying [source: Baranda].

Bar soap enthusiasts are quick to point out that most bar soaps contain glycerin, which is good for people with dermatological problems like eczema. It can even help people who just have dry skin [source: American Academy of Dermatology]. Also, for people who are allergic to fragrances, bar soaps can be the most convenient option; there are many bar soaps on the market that are fragrance-free. Fragrance-free liquid soaps, on the other hand, are a little harder to find.

So, are you convinced to return to bar soap? Not so fast -- the next page has some compelling liquid soap facts that might change your mind.

For the environmentally aware, bar soap is a greener choice than liquid soap. Because bar soap is typically packaged in paper or cardboard, its packaging materials are not only recyclable, but they also break down more easily in landfills than the plastic packaging liquid soaps come in [source: Bartels].

Pros and Cons of Liquid Soap

As with bar soaps, there are also pros and cons to using liquid soaps. One strike against liquid soap is waste. With bar soaps, it's fairly easy to know when you have acquired enough on your washcloth or loofah to get the job done. Because liquid soaps usually come in pump-action or easy-to-squeeze bottles, overuse is common. Factor in the higher cost for liquid soaps, and you end up with a lot of waste that you don't typically get with bar soaps [source: Bartels].

If you're a body wash enthusiast, though, don't give up hope. There are some pros to using liquid soaps. Unlike their bar-shaped counterparts, you never get that mushy pile of soap scum that often occurs when bar soap is left in standing water, although you can mitigate that problem with different soap saver products on the market. And while it's easy to lose bar soap down the drain, you're less likely to lose a bottle of liquid soap. In addition, liquid soap tends to create a richer lather, which many people prefer over thinner bar soap lathers.

Strong bar soaps, especially those designed to act as deodorants, can be too harsh for some people, stripping away important oils and leaving the skin irritated. Many liquid soaps and body washes contain moisturizers, however, and they tend to be milder than bar soaps. Women can benefit most from liquid soaps containing moisturizers -- their skin is typically more sensitive than men's, and using a deodorant bar soap can leave dry spots and cause itchiness.

The bottom line is that using liquid soap or bar soap is a personal choice. More than the method of delivery, the most important thing for you to be aware of is how you react to certain additives, such as fragrances and moisturizers. Whichever one you choose, note that the U.S. Food and Drug Administration ruled in 2016 that the benefits of using antibacterial soap haven't been proven and that the antibacterial active ingredients triclosan and triclocarban also have not been proven to be safe for daily use [source: FDA].

If you're interested in learning more about bar soaps, liquid soaps and skin care, see the links on the next page.

Legend has it that a worker at an Ivory soap factory left a soap-mixing machine on over lunch, which resulted in a fluffier-than-normal batch. The soap was shipped out anyway, and soon the company was flooded with requests for their floating soap. Recent company research, however, indicates that James N. Gamble -- of Proctor and Gamble, and the developer of Ivory soap -- had planned the floating soap all along [source: Ivory].